Saturday morning and a beautiful clear, crisp spring affair. The third consecutive weekend longer spin out on the bike, training for my first bike event since 2013, Le Tour de Yorkshire in just over a weeks’ time. The weekend before had been a bit of a struggle, back home for the weekend and out on my 18 year old mountain bike with knobbly tyres struggling on the road and a horrific headwind. This though, was heavenly; birds chirping away as I whizzed down the country lanes of Cheshire, the sun gradually taking the edge off the early morning chill. Thirteen miles down of a potential 32 miler, a nice flattish affair with a gradual descent for the first half and the breeze behind me, about to reach the furthest point from home before swinging round and back up through Knutsford and Tatton Park. An average speed a touch under 20mph, smashing all my PBs on Strava, it felt about as good as a ride could be. The Red Arrow, freshly rebuilt and with all the gears now in order, was absolutely flying along.

Suddenly, disaster. Dropping down onto the middle ring for a gentle incline and a without warning I was greeted with a horrific crunch, followed by pieces of metal flying everywhere, my chain in pieces and my legs flailing around like Chris Froome on Mont Ventoux. The bike was fucked, and I was stranded again.

My mind drifted back to my birthday back in October. A similar story, although this was a failing of my own idiocy. Sweating up Blaze Hill near Bollington (I know how to celebrate a special occasion, okay?) and about to enjoy the descent back down into Pott Shrigley, I felt the unmistakable jarring of a flat rear tyre. Happy bloody birthday. Foolishly swapping the inner straight out without checking the outer casing, I was instantly

greeted with a second flat as the tiny thorny bastard struck again, and suddenly I was stuck on top of one the highest points in Cheshire, some 14 miles from home.

Thankfully, Saturday’s disaster had an ultimately happy ending as by a remarkable coincidence, my chain had snapped five minutes walk from a local bike shop. Helpfully directed by a kindly soul sweeping his drive, in one of the last properties on the road before I would have been proper Out In The Sticks, I walked in pushing my crippled machine, and despite them clearly being in the middle of other jobs, within 15 minutes I was back on my way and only £14 worse off. Great lads.

A lucky escape then, but it really got me thinking about how bloody unlucky I’ve been over the years. My first ever proper road bike was constantly cut down by punctures and then just as I began to get a grip on them and get out and about on some longer rides, off she went. Stolen from, quite literally, under my nose by an opportunist shithouse spotting the door to my building left open.

It took me until the following August to finally replace her with The Red Arrow, and then after barely a handful of the rides came the birthday incident, a new set of wheels and a winter rebuild. A new year, a couple of pretty ropey rides with the gears slipping around all over the shop as I tried to get the indexing right and then when I finally got all that right the bloody chain exploded. Oh, and none of this is taking into account all the occasions when one of my vintage bikes has had some sort of complete mare; brake blocks and cabling failing, loose pedals, wheels and headsets, slipping chains, puncture after puncture on 30 year old tyres, a snapped saddle (!) and then the absolute nadir on 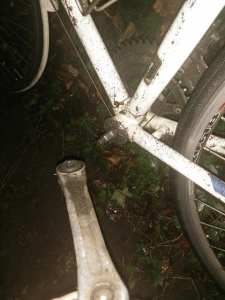 Christmas Eve when the entire crank fell off in the dark and pouring rain on my way home from work one evening.

I’m absolutely loving the new-found freedom of being out on the bike again, heading out to far flung places, up hill and down dale. The upturn in weather in the past few weeks mixed with me having two beautiful racing machines available has made a pleasant change to the usual start to a year, sweating and panting in the pouring rain, running up and down the same old stretches of South Manchester six days a week. But bloody hell, cycling is a pain in the arse sometimes. There’s so much that can go wrong, I can barely remember a ride without some sort of weird incident along the way.

It’s enough to almost yearn for the simplicity of going out for a run sometimes, where the only thing likely to ruin it is the usual worry about accidentally having a Paula Radcliffe moment on some of the longer runs or something. There is something beautifully pure about lacing up a pair of shoes, slapping an old football shirt and heading out just to run around for an extended period of time. But, after several thousand miles on foot, through a dozen pairs of running shoes and countless tales of sweaty woe over the past six years or so, I’m enjoying a bit of a change of pace. And with my first event of the year looming on the horizon, a lumpy 60km over some of the route of the inaugural Tour de Yorkshire, I just need to hope the bloody machines are up to the job.