After becoming a running idiot all the way back in 2007, I’ve now got 25 running events under my belt. And yet somehow I’ve always seemed to just about dodge any horrific weather while I’m out there racing. There’s been a few near misses along the way, don’t get me wrong; I live in the north-west, after all. Both marathons were forecast to be pretty horrific, only for me to end up dodging it completely as the heavens opened within a few minutes of crossing the line. Some of parkruns near me have been somewhat soggy underfoot thanks to the legendary “ditch of doom”. Mersey Tunnel 2011 was a bit drizzly. Generally though, I’ve been lucky, never getting completely soaked. Which brings me nicely onto my return to the road, and the inaugural Tour de Yorkshire sportive on one of the wettest mornings of 2015.

Arriving at the startline for my half ten kick off, I was already absolutely drenched just from the two mile shuttle over. I gazed enviously at all the others in their fancy cycling shoes with posh covers over the top of them and then looked down at my sad, soggy pair of running shoes I always used for cycling. A knackered old set originally bought for my 2011 marathon, with over 600 miles covered on foot before their deserved retirement in January, they soaked up the muck and moisture off the Yorkshire tarmac like a sponge and refused to let go. It was going to be a long morning. 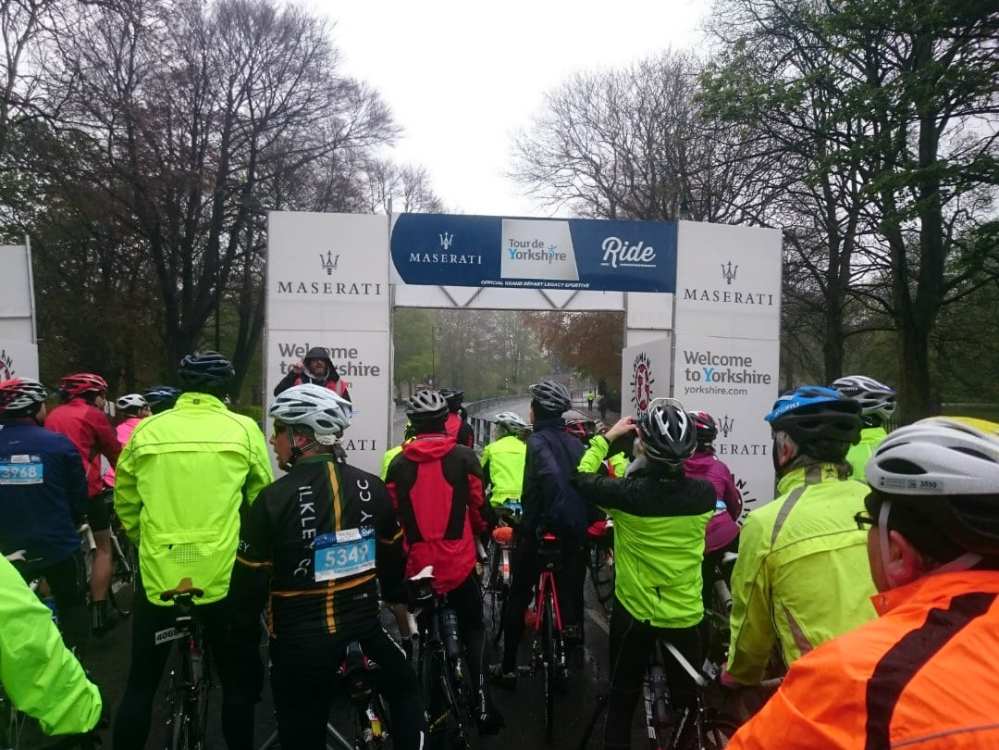 After a short briefing telling us which route to follow and to not ride like dickheads, we set off. I found the opening few miles a bit confusing though if I’m being honest. I’m a solo rider; occasionally with a couple of others (at most), but usually just me and the open road. I’m used to my own pace, which is usually a case of me going as fast as I feel comfortable until I realise I’ve overcooked it a bit too late to do anything about it and then trundling home in a bit of a daze dreaming about sandwiches and cakes. The only ever time I’ve ridden in a big event, the Great Manchester Cycle, it was full of lycra-clad nutters on crazy-expensive bikes, all forming little pelotons and hammering round at close to 30mph. I even got in a little group myself at one point before being left behind after stopping for food (standard).

A sportive though, is about “enjoying” the ride. As best you can anyway while grinding up a two mile hill in the pissing rain and gusting wind. It’s not about smashing it round, jostling for position, trying to muller all the Strava segments on the way round (although that doesn’t stop some from trying). It’s the taking part that counts and all that. What I’m trying to say is basically it all felt a bit…well, slow. The wave I set off with were trundling at literally half the speed I’m used to, and so after a short hop out of Roundhay Park and onto the main roads, I legged it up the first little climb and was suddenly alone. 6,000 entrants for this we were told; now it was just me and the open road.

With everyone setting off in small waves every few minutes there was a steady stream of people on the route and so I wasn’t flying solo for too long. As I’d picked the shortest of the three distances – with much, much bigger things to come later in the year – I saw all sorts on the way round. Mountain bikes, touring bikes laden with panniers, Bromptons, even a shopping bike or two (which promised to be fun on the hills in the latter half of the ride). The roads were mostly quiet and it was common to come across groups as many as four or five abreast, the grim weather refusing to dampen spirits as everyone chatted jovially on the way round.

There were even spectators at various points on the route, and I always made a point to wave back and acknowledge their support. It was one thing us lot being out there in the awful weather; after all, we’d paid close to £50 to do so and all had our own challenges and targets in mind, not to mention the fact that we keeping warm(ish) as we shuttled round. These fools though were just there to cheers us all on. The pros wouldn’t be coming past for hours, yet these hardy souls had given up their Sunday morning just for us. The woman stood alone after just a couple of miles outside The Dexter pub, in the absolute worst of the morning weather, and yet still enthusiastically jumping up and down and cheering us on as we trundled past in dribs and drabs. The group with a homemade sign at the top of a small climb yelling allez allez allez! as we struggled to the top. People stood in clusters in the small villages politely clapping us on, as if we were the pro peloton on the way round a tour stage. They were all amazing, and it helped no end as the rain and cold began to take hold. 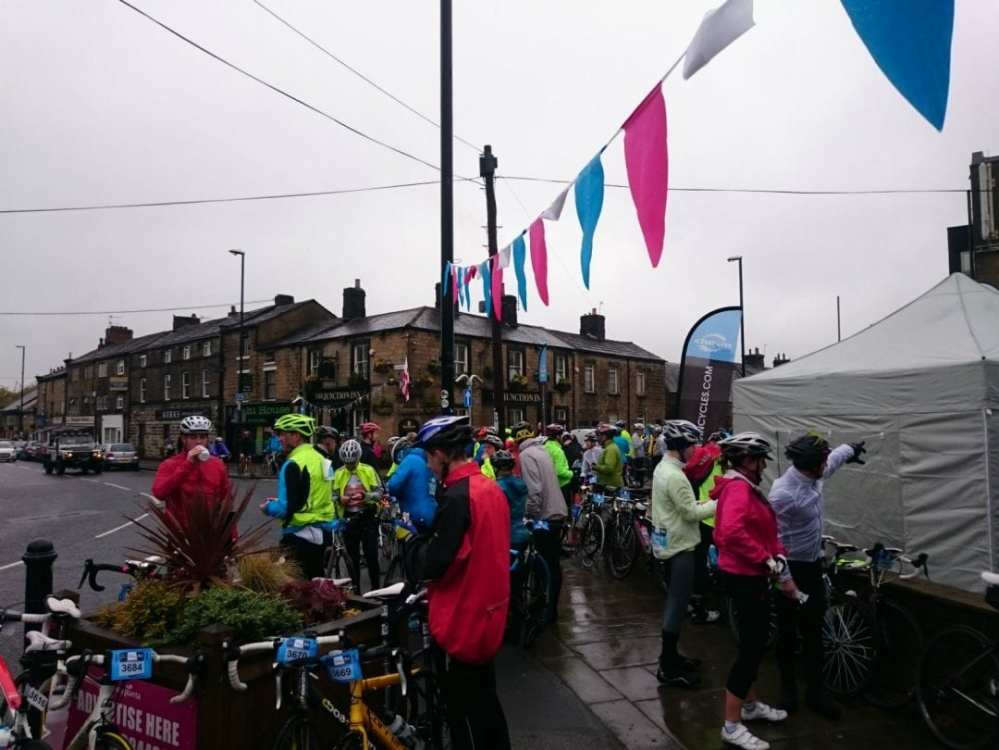 After just over an hour I rolled into Otley and the rest stop; the tiny village taken over by a mass of brightly coloured lycra and carbon, as well as a few bits of lovely vintage steel that caught my eye. I was glad to load up on energy drinks (served piping hot – a revelation!) and flapjacks as next on the agenda was East Chevin Road; a fairly legendary climb round these parts.

I’m crap at hills. My commute is flat. Most of the surrounding area where I live is flat. I have to cycle about twelve miles to get anything remotely lumpy, so basically I just don’t get the practice. Even with my triple chainset I struggle, using up all my gears before I’m even halfway up and often having to stop at least once for a breather (Blaze Hill and Cowlishaw Road – I WILL beat you one day).

So with that in mind, I wheeled out of the feed stop, headed for the foot of the climb and…turned left. Hang on. What? The Chevin had a police car parked halfway up and a sign with ROAD CLOSED at the junction. What was going on? We took a route around it, and while still a bit of a grind, it was nothing like we would have faced had we done the full thing. Shorter, less steep, not as high. All that worrying! I would later find out that we were never destined to do it; only the middle and long distances would be going up there. Either the maps online had changed, or I had cocked up and looked at the wrong one. No matter; the biggest challenge was suddenly removed, only ten miles to go, plain sailing all to the finish, right?

Not quite. Just when I was starting to think it was all a bit easy, one little sadistic lump at two thirds distance absolutely finished me off. Short, sharp hills are my worst enemy on the bike and this was exactly that. Within a few yards of hitting it people were off and pushing; some were still on, but wobbling and zig zagging across the road as if they’d just staggered out of one of the many pubs on the route. I dropped to my bottom chainring and started climbing, not daring to look up, mashing away at the pedals. Hang on; I was doing it! I cruised past several others struggling up, I was flying. I could see the summit, I rounded a slight left and then…shit, more climbing. It had flattened out a bit but I wasn’t even halfway up the bloody thing. Oh dear, the legs have gone. And now I can’t breathe. And now I’ve stopped. And I’m walking. Fantastic, there’s one of the photographers. That’ll look great on the mantlepiece. And so, another one to add to my list of Hills I Have Not Conquered In One Go: Black Hill Road. You utter, utter bastard.

That was it for me after that. I got back on my steed after pushing up the last few yards, but my legs were never the same again. Slight undulations had me dropping down off the big ring; anything previously considered a tiny pimple was now an Alpine ascent. One grind after another. We were now back on familiar roads, yet just when I thought the finish at Roundhay was close they sent us off down the ring road on a long detour into a headwind. And suddenly I noticed I had a passenger, silently sitting in my slipstream; sheltering from the wind and making me do all the work.

And so it was that my final challenge fell into place. I had to beat him to the line. Had to. In my head I began to play out epic finishes in grand tours of days gone by; a pair of riders battling each other to see who blinked first. Alright for those guys though; they didn’t have to content with fucking traffic lights, and despite managing to drop him on a 35mph descent, we stopped again at the bottom of Roundhay Park with less than a mile to go and my nemesis was back with me again. It was the endgame.

We stopped for what felt like an age as a few other riders joined us. My fingers twitched on the handlebars, waiting for the green light. This was it; no more stoppages from here until the finish line. Sportive my arse, this was war. There was no way I could let him jump me at the end after getting a free ride for the past five miles. The lights finally changed and I hammered off, not even daring to look back. Onto the final straight, the marker boards counting down 500 metres to go, 400, 300. The road sloped gently upwards and I was absolutely rinsed, but kept pushing just in case he was still there. This was the finish line the pros would be storming across in a few hours’ time and in all fairness, I felt like one of them as my final effort was greeted with cheers and banging on the barriers from those spectators already there reserving their spot for the main event. I realised I had left everyone behind at the last set of lights and I rolled over the line alone, absolutely delighted with myself. I had done it. My first ever sportive in the bag, and my nemesis nowhere to be seen. 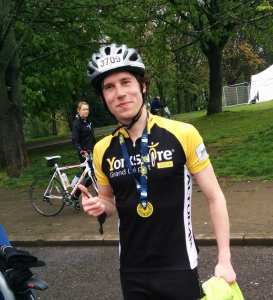 So a successful morning, all in all. I was wet, I was cold, I was filthy, I was knackered. But I had enjoyed myself, riding with others, spinning over some different roads and attacking a few new climbs. Even having a little duel over the last few miles. And then finishing on the actual finish line with scores of people cheering me on was pretty bloody special. It was exactly as I wanted it to be really; a nice little warm up for the bigger things to come in the next few months. But first, a shower. 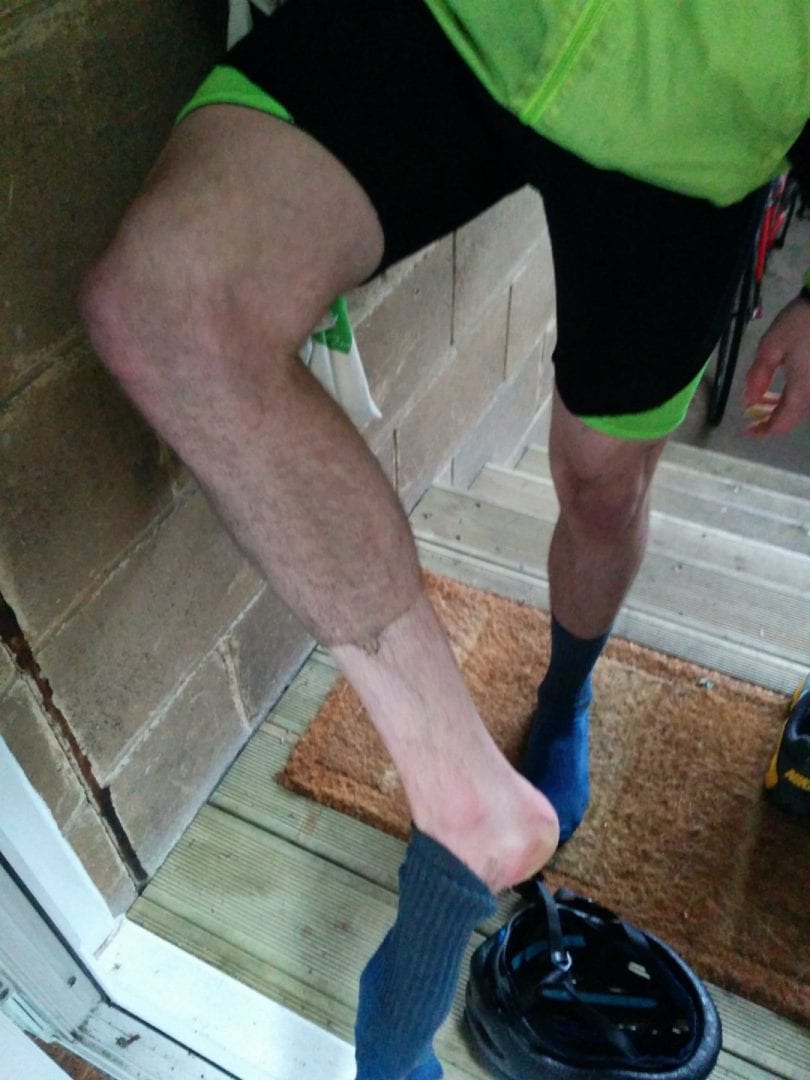