Only took me three years to finally run this one. The 2014 edition of the City of Salford 10k is, thankfully, still to this day the only time I have ever pulled out of a race on the morning, as a dose of crippling insomnia overnight left me feeling distinctly undercooked ahead of the proposed 6.2 mile sprint around the quayside. Thankfully that had a happy ending as the four others I was due to run with all had a great day at the office, but I still felt like I had some unfinished business to attend to with this one.

I’m not sure why it took me three years to actually get round to it though. Maybe it was the underwhelming reviews, or the the uninspiring prospect of running around an industrial estate on a Sunday morning. Maybe I just couldn’t be arsed dealing with Metrolink to get there (more on those chaps later). Regardless, entry was pretty cheap with a discount thrown in, and the course promised to be fast and flat, so finally I pulled the trigger and tossed an entry in for it with only a few days left before the big KO. And this time I planned on actually making it to the startline.

Aside from it being a race I’d never run before, another novelty was that I’d be taking part in a running race alongside my wife for the first time ever. We both ran the Great Manchester Run back in May, but with me running the morning half marathon and her taking part in her first ever 10k some five hours later, we weren’t really running together at all. In fact I had time to get home, have breakfast, have a shower, get changed, have lunch and pedal out to see her trot past me twice along the A56. Here though, we would be starting the very same race at the very same time, which was all very exciting. Thanks to pisspoor race organisation we literally were lining up alongside each other in the startpen at one point, which again was an exciting novelty, however with our predicted finish times falling around half an hour apart it perhaps wasn’t the most sensible piece of planning.

We both had our own aims and aspirations for the race heading into it. I always harbour dreams of a sub-40, regardless of the training that’s gone into it (or lack thereof) but it’s impossible to know how it’s going to go on the day. I’ve had some I’ve trained my nuts off for where I’ve fallen to pieces in the final third, I’ve had a couple in recent times where I’ve barely trained, gone out on the piss the day before and then brought it home half a minute inside The Target. I have no explanation for why this happens.

Jenn was aiming big too. Fresh from taking six minutes off her predicted finishing time on her debut 10k back in May, she then set about plotting to lop another four off to get under 1:10, with the Salford 10k coming as a bit of race practice during her training plan ahead of the main target of doing it round Standalone at the start of October. Suddenly she was asking me about training plans and footwear and all sorts, buying a specialist pair of lighter race shoes, researching Runner’s World pace calculators and nagging me to get the race entries sorted, when all I really wanted to do was get out on my bike or head to a beer garden. How times have changed.

I’m secretly thrilled though. I loved seeing her little face as she plodded round the Manchester 10k a few months earlier, and seeing how chuffed with herself she was at the end. Running can be a right old load of shit sometimes but the successes make all that struggle worthwhile. Taking six minutes off her intended finish time was a pretty massive first success, so hopefully all the hard work she’d put in over the summer would be worthwhile.

The 10:15 start time gave us plenty of time to head over and grab a coffee beforehand, sheltering in the warmth of the university with the brisk breeze outside chilling us to our bones once we’d handed in our baggage and extra layers. The weather was decent for running but not great for standing around outside in skimpy running vests, which unfortunately went on for even longer than necessary thanks to a complete ballsup with Metrolink where they couldn’t get their bloody trams off the first part of the course before we were due to start. Considering this happened a couple of years back as well, words fail me how the organisers could get it so utterly wrong yet again. 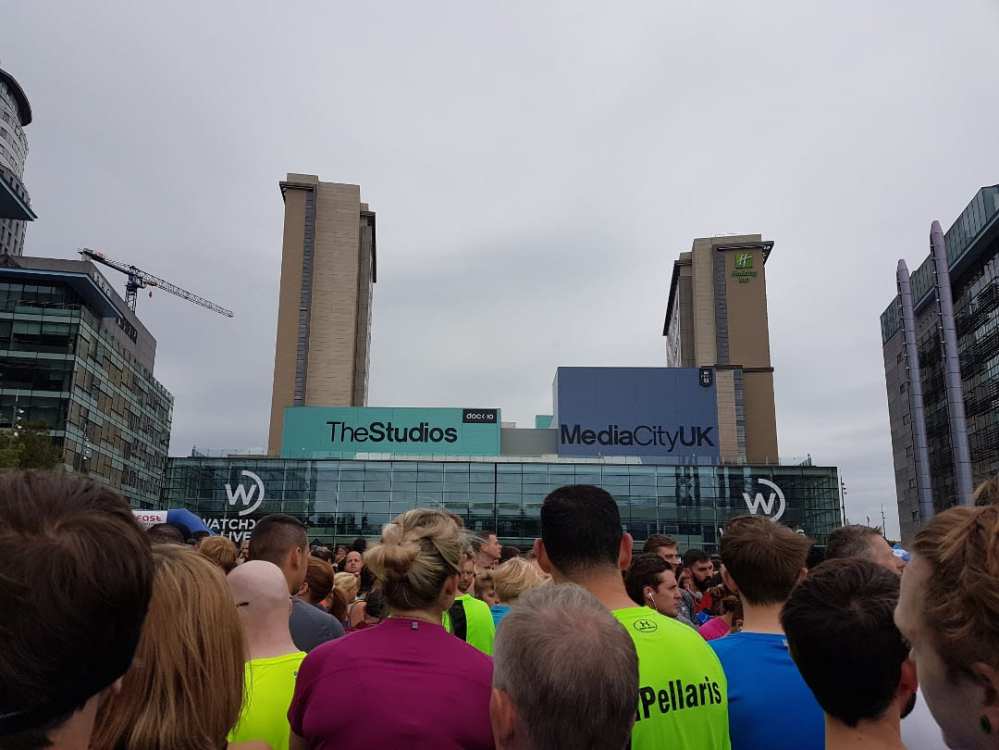 The start was a shambles in general to be honest. Approaching the kick off time we were basically all just chucked into a start pen, all jumbled up, all abilities mixed in together. With Jenn aiming for a sub 1:10 I just told her to look for the hour pacer (the only pacer they had I think) and then stand a bit back from that, however from where we ended stood they were nowhere to be seen. Half the crowd of runners couldn’t even fit in the pen so just ended up standing around in the area they’d just warmed up in, a big open space between the TV studios ready to funnel into the bit leading up to the startline. Jenn looked a little apprehensive about how far forward she had ended up and then as the delayed start time dragged on and on with no idea as to when we might actually be getting underway, she took the eminently sensible decision to nip for a quick comfort break and rejoin further back.

Not that there would be any guarantees that she’d end up with runners of a similar pace around her then though. Because of the way we’d all just been lumped in together we all were out of position. I was reasonably far forward but when we finally got underway there were loads of slower runners in front of me and the narrow route made this even worse as everyone tried to sort themselves out. It was the most chaotic start I’ve ever had to a race, which was a shame as there were some decent crowds in that first stretch, all yelling and clapping along the side. It was hard to pay attention though when you’re trying not to trip anyone up, or be tripped up. Now was not the time to smash my big face onto the Salford Quayside.

Thankfully within half a mile or so the roads widened and it became easier to get a bit of a rhythm going. I don’t know how it was further back but I was able to find a bit of space and sit nicely at my sub-40 pace, wondering where the wheels would come off this time. Usually it’s about mile 4/5 when the pace starts to balloon, but here it never really happened. I’d put in a couple of fast miles early on to get some time in the bank and then with my slowest mile of the lot coming in just two seconds outside the 6:27 I needed for a sub-40, I knew with a decent finish I would be able to bring it home. Much like Standalone, the very last bit here is downhill so I steamed over the line, leaving all the lads in my wake I’d been running alongside for the past half hour. I felt it had gone so well to be honest that when I checked my 39:53 finishing time, I was actually disappointed that it wasn’t faster. Nevertheless, a good day at the office.

As the drizzle began to creep in I was glad of being able to grab a warm hoody from the baggage area before strolling down to catch Jenn cross the line. I met up with an mate who’d also just finished and we both stood together, comparing times and whingeing about the start so much that we almost missed her steam in. Thankfully she saw me first and shouted over, her face beaming once again as she knew she was on a good day. She ended up beating her target again, hitting a 1:09; nearly eleven minutes quicker than she thought she’d ever be able to run a 10k before she ever started. Quite a performance.

It was an “interesting” morning anyway. I’m not sure I’ll be back to the Salford 10k, although the potential for a PB is there due to how flat it is. The bits around the Quays were quite nice, with some fairly decent crowds (even if it was hard to appreciate the first bit due to all the stress). With a discount it was pretty cheap, half the price of the much, much bigger Great Manchester Run, and you still got a medal and a technical T shirt at the end. But the start needs rethinking, and to have two delays due to the same cockup with the trams in recent years isn’t really forgivable. And I don’t think anyone will agree that the middle miles around Trafford Park are especially scenic, although the (empty) tour bus parked outside a factory around halfway suggests there might be some demand for it. But anyway, it is what it is, and when I look back and think more about the achievements on the day, it was well above average. Another sub-40k to add to the collection, and best of all seeing my wife steaming over the line with a big grin her little face, smashing her PB into tiny pieces. Maybe we will be back again one day, after all.