It’s rare that an event slips by without an immediate writeup these days but as you can see here, that’s what happened with my second race of the 2017, well over two months ago now and a fourth appearance at the Great Manchester Run. It was all very different to previous years though after the appalling attack at the Manchester Arena on the Monday beforehand, and in fact we didn’t even know if it would be going ahead at all until around 48 hours or so before the day of the race.

It was an incredibly difficult week as people struggled to come to terms with what had happened, but often in times of great adversity comes great strength and the Mancunian response was amazing. Stoic, defiant. Showing that we will not be beaten by hate, or by attempts to install fear and division in us. A city standing together arm in arm, a city united. A city trying to move forward again.

The 2017 edition of the Great Manchester Run would come to be a part of that. One of the biggest events on Manchester’s annual calendar as well as the largest 10k in Europe, most felt it was important that it went ahead as it would give us a chance to show we are not willing to let fear rule the way we live our lives. A chance to try and begin to move on as best we can, and a chance to pay tribute to the victims and their families. I lost count of the number of people who were running in memory of the Manchester 22, adorned with various messages and hand drawn worker bees on their running kit. The traditional symbol of Manchester’s hard working past from the industrial revolution, but now having taken on this enormously poignant new meaning. 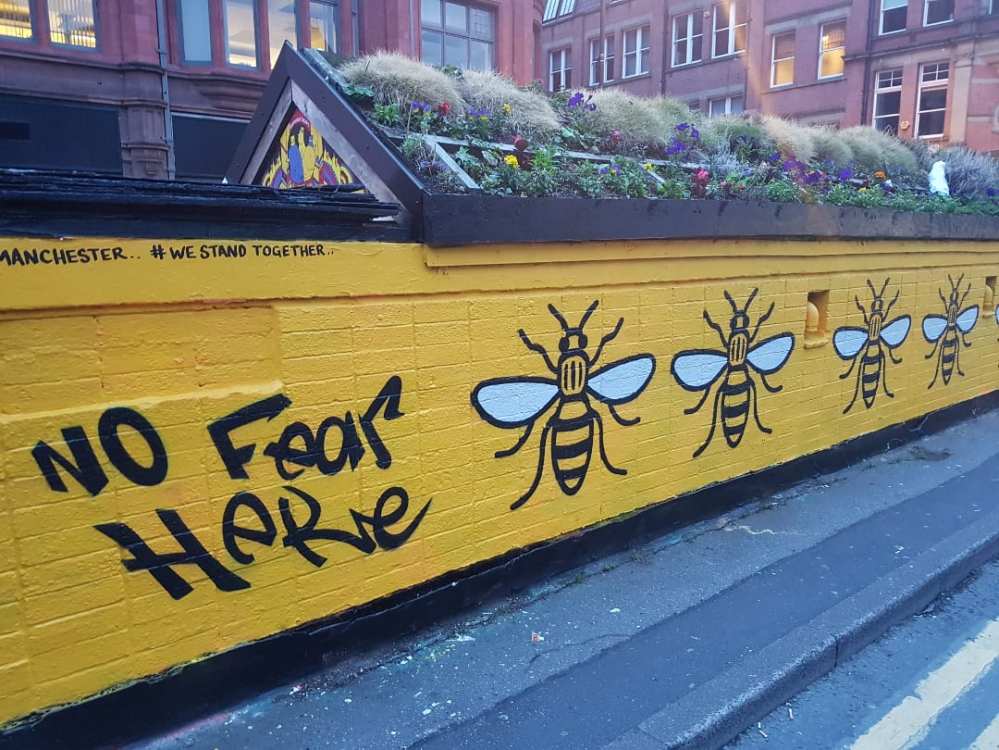 We lined up ready to go at an unfamiliarly-early 9am thanks to a new half marathon kicking things off in advance of the usual 10k later in the day. An immaculately observed minute’s silence was followed by an enormous wave of applause from the crowd of runners and spectators as Don’t Look Back In Anger played out over the tannoy, and then again once it finished. I gazed around at the various signs on people’s backs paying tribute and suddenly out of nowhere a huge bumblebee wafted its way into my area of the starting pen and spread a mild panic throughout every single runner it went anywhere near. I couldn’t help but raise a teary smile at this oddly-appropriate piece of timing.

The race itself was decent although not without a couple of minor issues early on. Hopefully for next year some of the opening sections can be done differently in some way as to as to give us a bit more room, as once we’d swung off the traditional start of the 10k route and onto the new bit up and over the Mancunian Way it was all a bit congested and stressy. For a good couple of miles it was impossible to maintain any semblance of a consistent pace as it was a case of wait, go, wait, go as spaces became available to jog into and the field sorted itself out into its natural order. A narrow footbridge over to the Etihad Stadium was worse, divided in half as you go over it there and back, with my mate further down the field complaining that it had got so busy that he ended up basically have to queue and then walk / trot over it. Mind you he had done literally zero training whatsoever so was probably glad of a bit of a breather but I can imagine those pushing for a PB would be less impressed.

It didn’t really matter to me anyway. Today was about more than that and I wasn’t going for any sort of a time. As with pretty much all the races I’d done in the past twelve months, it was the taking part that counted, not the outcome. Admittedly last time I said that for a half marathon, at Manchester’s other brand new 13.1 miler back in October, I ended up running my second fastest ever, but there was little chance of that happening here. The early congestion didn’t help, but to be honest I was just pootling round the course, waving or giving a thumbs up in appreciation of anyone stood clapping and cheering us all on. The support wasn’t bad considering the earlier-than-usual start time (and with the main race still hours away) and there were even a few little clumps of supporters stood high up on the usually off-limits Mancunian Way which was a nice surprise.

The second half of the race followed the traditional 10k course, which was mentally a little tough heading onto essentially the “start” of the race I was normally used to running but this year with over eight miles already in the legs. A proper noisy section of supporters greeted us at the roundabout with Chester Road as we swung off the half marathon course and it helped no end, a nice big roar as we all jogged through and off onto the A56 up to Old Trafford. And then before I knew it we were running back down it the other way, past all the music tents and the wonderfully boisterous charity points. Back down into town and then that familiar big finish on Deangate, through the crowds of spectators and up that little slight incline I always forget about in the last couple of hundred yards. The steady start and consistent-ish pace meant I had a bit of a sprint left for once and I barrelled over the line as fast I could go, completing my slowest ever half marathon in the process. It didn’t matter in the slightest and kept nicely in with the theme of 2017. Being there to be a part of something. Running, not racing. No time target. Raising money. Running for charity. Running for Manchester.

As with last year, the next part of the day involved heading back down the course and and cheering others on. A few work colleagues would be taking on the 10k, also running for Francis House Children’s Hospice, and I knew a couple of old university pals as well out and about on the course. Best of all, years and years and years of droning on about running wankery to my wife had finally ground her down and towards the end of last year she took it on herself to work through a Couch to 5k programme and then went on to run her first ever parkrun on a typically drizzly Mancunian morning at the end of October. After we got married in December and then let ourselves down a bit on a two week all-inclusive honeymoon at the start of the year we gradually worked back up to some semblance of fitness and then before I knew it we were having all sorts of conversations about training plans and running shoes, planning our weekends around both of us being out for a long run on a Sunday and God-knows-what-else. We are both running wankers now.

In a nice piece of symmetry her first ever 10k would be here on the very same course I made my 10k début back in 2008. Also running for Francis House, she singlehandedly nearly raised as much as our entire work team (five runners) did, which was impressive enough. Even more impressive though was the fact that she went out and smashed the bloody thing a whole six minutes quicker than she was planning to, the “big event” feel and raceday adrenaline delivering a performance beyond her wildest dreams. 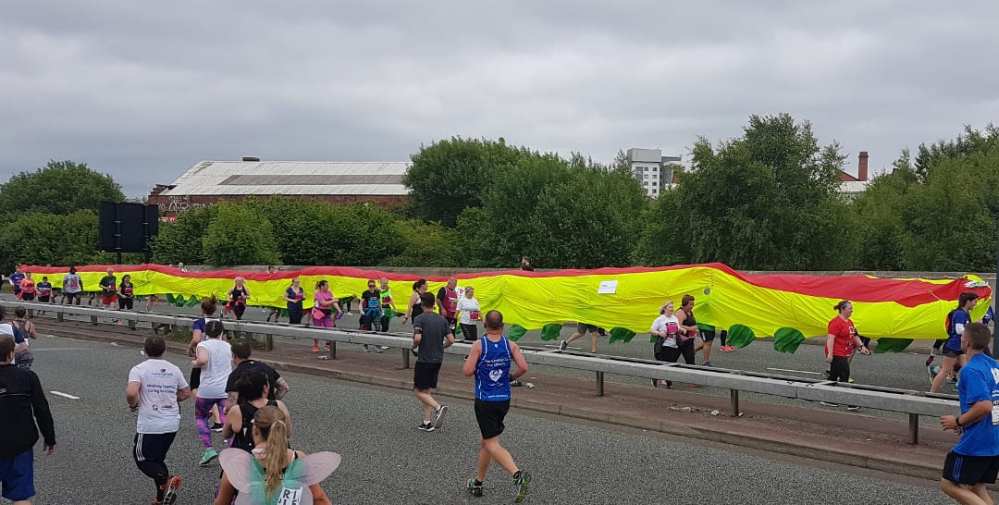 I enjoyed spending my afternoon out on the A56 cheering her and everyone else on, including what I think was an enormous Chinese Dragon at one point. It’s a decent spot to spectate from just FYI as not only do you see everyone run past twice but as the support is pretty sparse along there, especially the stretch between Cornbrook and Pomona, you will always get a spot. I had a great big chunk of dual carriageway all to myself, well, me and another bumblebee buzzing around in amongst the roadside flowers. 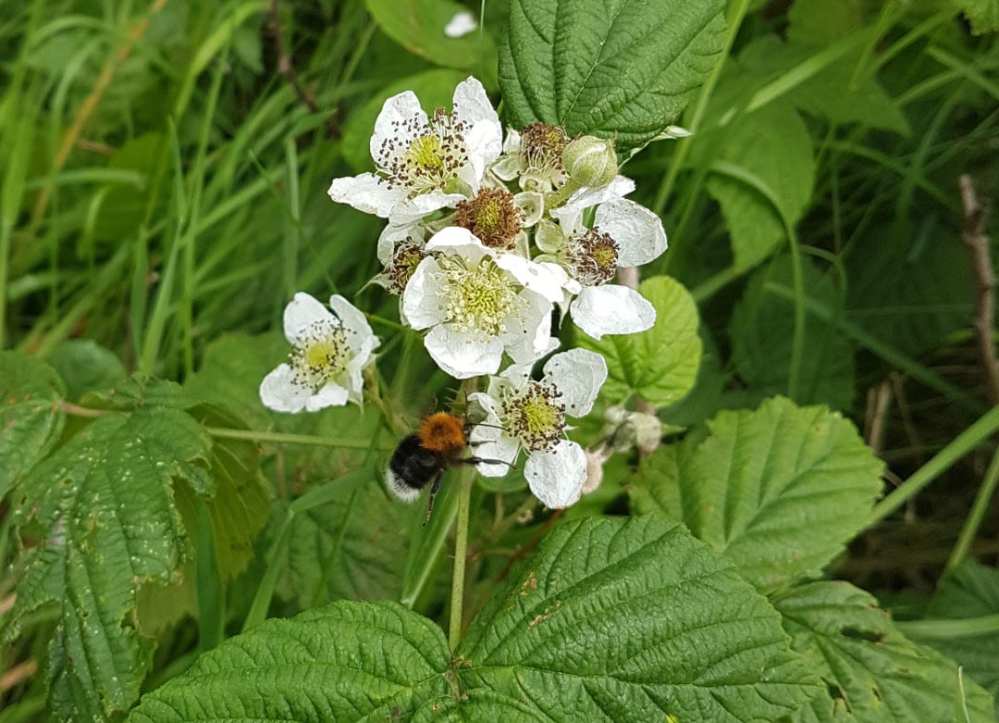 I also I know from running along there how much it’s appreciated seeing a friendly face at that point. With the afternoon temperatures nudging into the low 20s it was great being there to support Jenn as she steamed past so I could dish out a fresh bottle of water, and then be there again on the way back into town as she crested that little incline at mile five that saps the legs so much before you get onto the gradual drop down towards the big finish. It made me so proud seeing her little face out there (almost) enjoying her race and I couldn’t wait to get back into town and see her cross the line, although she hammered the last bit in so strongly that by the time I’d grabbed my bike and pedalled back into town she was already in the pub and halfway through her first pint. A stunning performance.

The 2017 Great Manchester Run was a race unlike any other I’d ever taken part in before (which is pretty remarkable considering it was a race where I went over the exact same bits of road for the fourth time in nine years). It was a race of great significance and of incredibly strong emotion. There was a good deal of pride and joy of course, seeing my wife run her first ever 10k as we all raised approaching a grand for the Francis House Trust. Above everything though was a sense of heartbreak at what it was that we were running for. As I no longer work in town and had various commitments being away from Manchester in the evenings in the aftermath of the attack, this race was the first opportunity I’d had to visit the city centre and head down to St Anne’s Square where the frankly breathtaking memorial had sprung up, a vast sea of flowers along with candles, toys, football shirts, running numbers. Handwritten notes and scrawled messages on the pavement in coloured chalk. Almost total silence in one of the busiest areas of Manchester as people from all over came to pay their respects. It was unbelievably moving.

It’s been tough to get this one written up. Even now, nearly three months on, I’m still not sure I know how I feel writing about the events of that week. An event that I hope we never, ever have to go through again. I will never, ever forget what came after though, how the folk of Manchester responded to such a tragedy with such incredible strength. I don’t think I’ve ever been so proud, so honoured, to call this place my home, which it is now after spending over a third of my life here. And along with 40,000 other runners, me and Jenn were a tiny, tiny part of it all when on 28th May 2017, we ran for Manchester.

You can donate to the We Love Manchester Emergency Fund via this link. 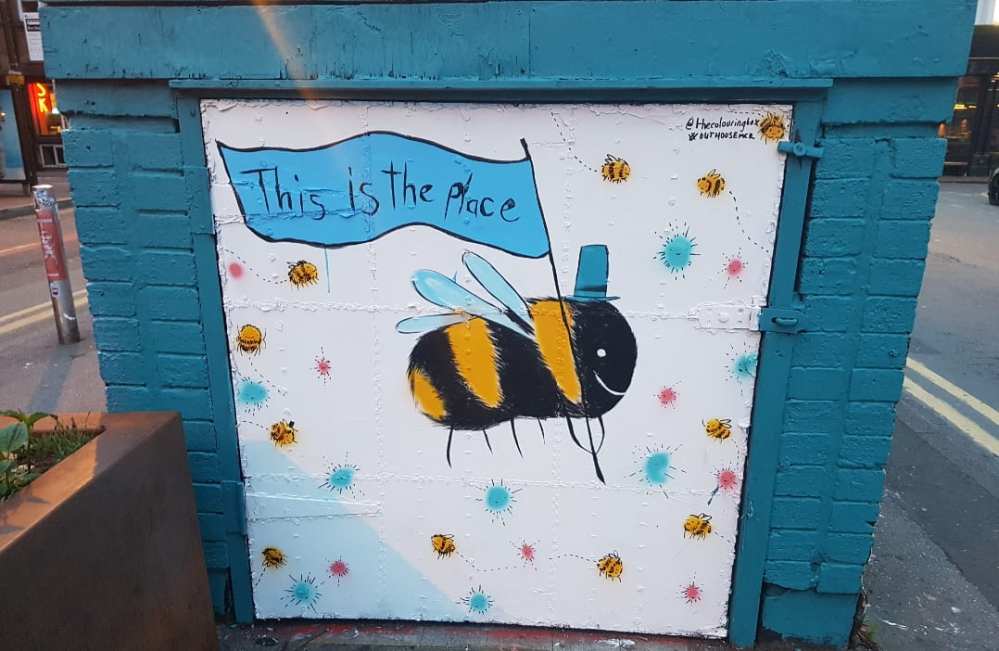 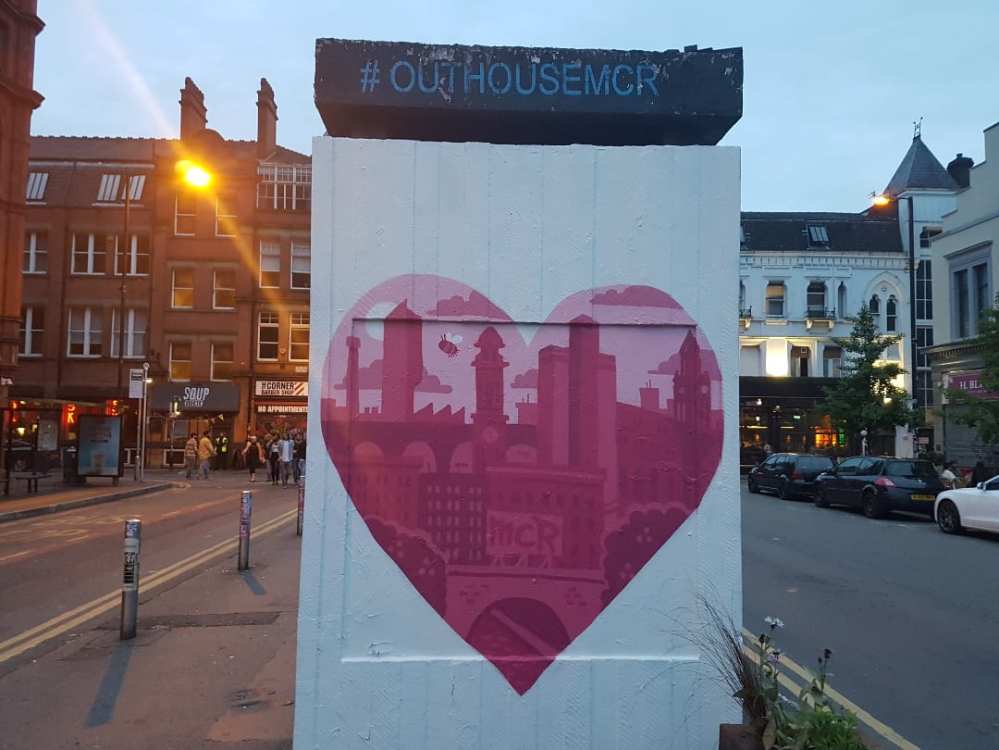