A week on and the poor girl still isn’t home. Where is she? I hope she’s OK, wherever she is. On that front, I’m beginning to think I’m going to have to stop referring to my bike as “her”. For one, it’s a bit embarrassing for a grown man attaching a gender to a collection of metal, rubber and cables, if not downright cringeworthy. No matter how beautiful she was (and how much pleasure she gave me, ahem). Also, it makes it all a bit too personal. I need to move on. My bike is gone. I may get lucky and get it back. I’m 99.9% sure I won’t. Assuming it gets punted on, I hope that the person who ends up buying it – presumably oblivious to the fact that it’s been stolen from me – looks after it, enjoys it and generally has a whole heap of fun on it. And most of all, I hope that the person that stole it gets some form of horrible comeuppance, although I will leave this up to your own imagination as to what this should be.

It’s been a week of mixed emotions since the initial confusion / horror on Thursday morning when I realised what had happened. After convincing myself that, yes it has definitely gone and no, I’ve not left it somewhere else and forgotten, it’s been pretty much all just a general sadness that it happened really, especially with the added sentimentality of it being my birthday present. Even some of the accessories being little personal touches that people had seen and bought for me. There’s been anger too of course, that someone thought that they could come into my flat and take my property away. Frustration that I spent (another) £20 on accessories only a few days before and they were taken with it. Then there is the massive annoyance that it now takes me half an hour extra each way to and from work, walking through Ardwick to catch a bloody Magic Bus with the heating on full whack. It’s enough to make me glad that summer appears to be over.

Hopefully this will all be temporary anyway, I’m on the lookout for something else already. Nothing too flash, nothing too attractive to potential scumbags. Tempting as it is to get a lovely new shiny racer on the Cyclescheme, I’ll probably go with something more along the lines of my old Peugeot Premiere; a project of sorts. 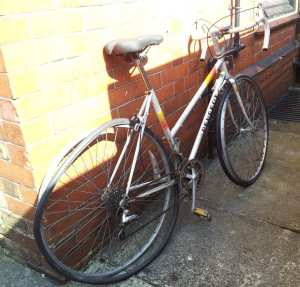 Something with imperfections, something that needs a bit of love, care and attention. Something a bit old and knackered, like me. A bike I can grow to love. A bit of me thinks that I might even go back and fix up the old girl (being a ladies bike, it’s OK to refer to it as “her”) but unfortunately one or two of the issues are pretty severe and for now she most definitely is not roadworthy, with a collapsed rear wheel and a loose headset. Not to mention practically non-existent brakes, slippy chain and no tyres. Some work needed methinks.

Anyway enough of all that. Faced with my main outlet for exercise no longer being with me, I’ve begun to grow a little restless. Suddenly, eating that huge triple burger from Mud Crab Café, after a full Saturday at the Marble Beer Festival (with meaty burger grill), after a Friday night post-work Tiger Lounge cider session with a free pizza all to myself, isn’t then going to be balanced out by 70-100 miles on the bike the following week. I need an outlet. A challenge. Something to aim for, and most of all, to take my mind off the theft. Something to set the pulse racing. And, unfortunately for all of you, something to blog about.

It’s time to get back on my feet. Lace up my poor, neglected running shoes. Swap the padded lycra shorts for something a bit more, erm, flattering, and head out to pound the Manchester concrete for the first time in weeks. Apart from a quick sprint for the bus here and there, this is probably the longest I have gone without running since I went travelling in 2008. My last run was the Port Sunlight 10k back in May, which in itself was the first run I’d done for a month before that as I began to fall in love with my bike instead. I did 54 runs in the first three months of the year; I’ve only done eight since, seven of which were in April, and then none since that singular mid-May jog around a bizarre model village on the Wirral, which left me hobbling around for nearly a week afterwards in agony and vowing to only travel on two wheels from now on.

Now though, I have no choice. My feet are all I have left. I went for my first run in over two and a half months last night, and today I hurt on all of the bits of my legs. ALL OF THEM. I only did three miles, and I was knackered, sweating and nearly heaving. My legs are used to going round and round, now I am telling them to go up and down and carry my entire body weight (and my massive face) with them. How did I ever run a marathon for crying out loud? Even a half seems an awful long way away. I have the Standalone 10k in the diary for October 6th, and I was planning on doing it in a similar manner to last year, with just a couple of training runs to loosen up a bit and then a nice jog round Hertfordshire enjoying the scenery. Now though, who knows? I’ve suddenly got two months spare to actually train for it, and it’d be a shame to waste that now, wouldn’t it?