So April 5th 2020 came and went, and I didn’t run a marathon. The date I had laid eyes upon back in December – a third crack at the marathon of my adopted home of Manchester – became a mere footnote to my running year rather than the entire centre of it. For the first time in my entire life, I had a race cancelled – well, postponed – before I even got to the startline. Game over, for now.

I had long since resigned myself to it not going ahead as the scale of the coronavirus crisis grew and grew, and to be honest my only surprise in the end was that it hadn’t been called off sooner. As it stands, we race on October 11th – although I have severe doubts at this stage if that will happen either – but as for my April 2020 Marathon For The Christie, that was that.

With the official announcement calling it off coming relatively close to the original event date I was just going over the very top of the peak of my training plan at the time, the last Big Weekend and the final Sunday long run before the lovely taper down to raceday, where it all starts winding down a bit to try and give myself a bit of rest and recovery and let all the hard work sink in. The vast majority of the big stuff was already all in the bank and so I began to moot ideas to try and still mark the occasion in some way and not let it all go to waste. Those of you who caught my last blog will know that the result of all this was the findarace.com Plan B Virtual Half Marathon; a chance to stretch my legs at race pace, earn a cool little medal and raise a bit of money, both for my own fundraising page for The Christie and for the World Health Organisation’s COVID-19 Solidarity Response Fund through my entry fees for the race.

The “race” itself took a bit of planning. Since I was intending on treating it as a proper event and so aiming for a pretty hard pace and (hopefully) a decent time, I wanted to make sure I could keep myself as distanced as possible from other folk which meant it was probably best to avoid many of my favourite routes along the narrowish paths on the banks of the River Mersey, across the Fallowfield Loop or around any of the local parks. The forecast for the day was looking good so especially with it being a Sunday I knew there would be many others out and about exercising in small family groups so I really didn’t want to be the guy steaming past everyone at full pelt, panting and coughing and all that. I mean, no one really needs that at the best of times but especially in the present climate it was important to make it as easy as possible to stay as far away from people as I could.

In the end I settled on a fairly boring route, a 6.55 mile course that I would run twice, all along big main roads with nice wide pavements and the opportunity to run in the road where needed, which had become increasingly easy to do with the massive reduction in traffic in recent weeks. This also meant I would never stray too far from my flat in case something went wrong at any point, and best of all (mostly by chance) it meant the last two or three miles of the lap were on a nice downhill and then turning into a tasty little tailwind to help me bring it all home. It was all falling nicely into place. 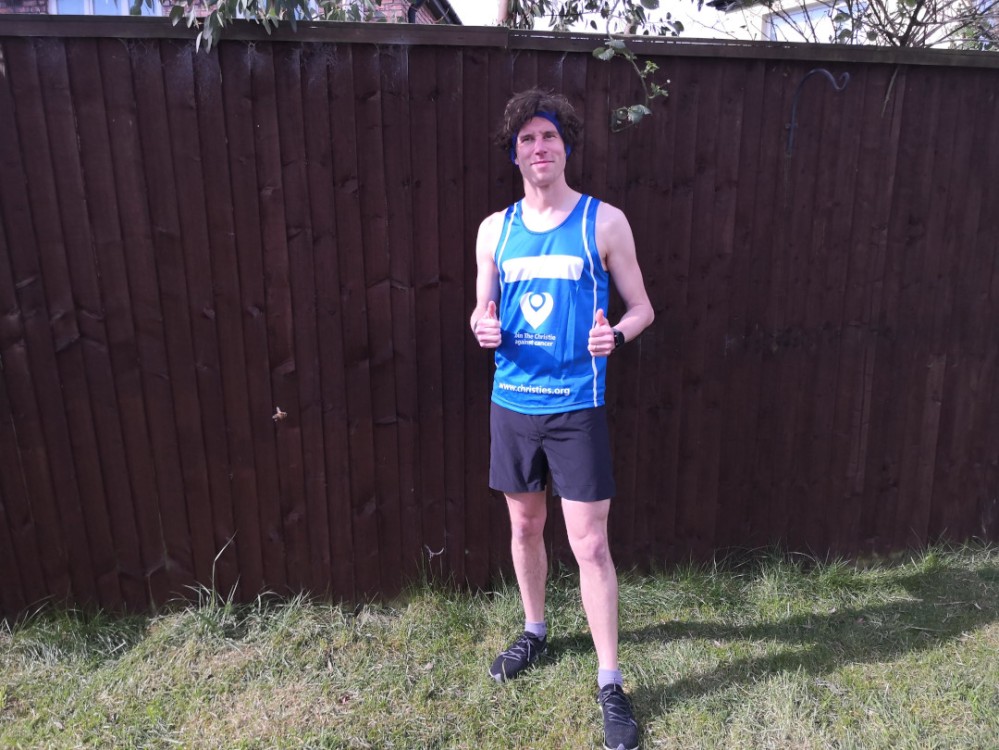 After a quick snap in the garden in my full charity kit to put on all the socials later that day, it was time to kick things off. It had been a nice relaxed start to a race morning with no set start time, no travel stress and best of all no massive queues for stinky portaloos. I could just roll out of bed, eat my breakfast, visit my own lovely china throne as many times as required, and then just walk out my front door and get going as soon as I felt ready. At 10:37am, I felt ready and off I trotted, heading north up the A34. My first ever virtual race was up and running.

The opening lap was pretty hard to be honest, especially the long, straight leg back in the other direction down the A6, into a much stronger headwind than I’d anticipated. It was a real drag. Running completely solo, there was no hiding from the wind as you can sometimes do if you’re running in a group in a race and I was finding it hard to motivate myself to run at a race pace without the adrenaline that comes with being part of a big event. I was barely 5k into my half marathon and I was already starting to drop behind my (fairly loose) target of a sub 90 minute job and, despite all the marathon training in the legs from the last few months I began to feel increasingly like I didn’t have a huge amount in the tank to turn it around.

As soon as I turned out of the wind and began to head downhill to complete the lap though things began to pick up a bit. Despite the poor start and difficulty motivating myself to run at race pace in what was essentially a non-race, I was actually getting back on track for a solid time with mile six only just outside my 10k pace. It was starting to come together, but I knew I still had to negotiate that bastard headwind once more on the second lap with an extra few miles already in the legs this time around.

It did indeed prove much, much worse on lap two. I was probably only going down that long, straight stretch for around ten minutes all in all, but it felt like a bloody lifetime; a slow, steady grind up a fairly gentle incline, all the while being buffeted around all over the shop. I felt absolutely exhausted at times and saw my pace creeping up over my target and without knowing how much time I had in the bank from lap one I couldn’t tell if this was the sub 90 going out the window or not. It was heavy going.

Again though, as soon as I turned off the A6 and got into a bit of shelter from the wind and then hit the downhill stretch it was all but a distant memory. Miles were dropping off well underneath the time I needed with the final two actually coming in under my 10k pace and suddenly it was all back on again. An absolute rollercoaster, I brought it home in 1:27:37 and out of nowhere I had my second fastest half marathon of all time. God knows what I could have done in a full event.

I was chuffed to bits and didn’t even wait until I’d showered before opening a celebratory beer, running straight into my flat and immediately to the fridge; another bonus of having the start / finish for a race being the place you live. 18 months ago, I set myself a target of getting under the 1:28:00 that had stood as my half marathon PB since 2013. Since then, I’ve done it three times in consecutive attempts and that famous run now doesn’t even make it onto the podium. It’s absolutely nuts. Even more so doing it here, running totally solo and without the usual race day adrenaline and crowds of runners and spectators to help keep the motivation up on the way round. It was a result beyond my wildest dreams and a tiny bright spot in the sea of gloom and misery that is 2020 to date.

It also helped top up the fundraising a bit which was kinda the point of the whole thing with the main event still some way off (if it happens at all) and with charities such as The Christie starting to struggle with all these cancelled events over the last few weeks. Before the month was out, I also took part in the 2.6 challenge to try and raise a little bit more, nipping out my front door once again, this time to run a metric marathon (26.2km instead of miles) in the continued absence of the full one. It took my virtual race distance total over what would have been the full marathon had it gone ahead on April 5th and I still hold hope that at some point when it’s safe enough to do so there will be a chance to get the main job done and try and raise some more still.

Maybe it’ll happen, maybe it won’t. As I said last month, there’s a lot more important stuff going on at the moment so I guess all we can do is keep doing what we’re doing, getting on with life as best we can and maybe throwing in the odd little challenge along the way to create a bit of interest, something to aim for. Something to focus on and help aid my physical and mental health with a few little runs here and there every so often to try and shift the anxiety that’s hard to avoid in these strange and tragic times. I’ve already started the next challenge, this time with a few buddies in tow, and I’ll be able to tell you all about that one in a future post, but for now I’ll close in a similar vein to last time around by just saying that I hope you all stay safe, keep looking after each other and hopefully we’ll all see each other on the other side, whenever that may be.