I hadn’t planned on writing this one up as a full post. The latter part of 2018 has all been setup towards aiming for a half marathon PB at this Sunday’s Manchester Half Marathon and nothing’s really changed there. I’m on the gradual taper now after some of the hardest training I’ve done in years and, injury niggles aside, I’m feeling pretty good and keen to get going and see what I’m capable of five and a half years on from that 1:28 in Liverpool. This year’s Standalone 10k was just meant to be a footnote to the bigger picture, a practice run for the main event. Testing out the kit, breaking in the new racing shoes. Getting the routine together and making sure everything works. A nice little jog round this most familiar of races. It would be my seventh Standalone overall and my sixth since 2012 so realistically, how much more is there to be written about it? Can there still be a story to be told after running the same race for over a decade now? Well yes, in a word. The 2018 edition will go down in history as one of my best ever days at the office, on the same day the famous finishing arch fell victim to its own curse. Let me start at the very beginning.

For those of you unaware, this race is cursed. Cursed I tells ya. Literally every single year since my first in 2008 there has been some sort of mishap and the number of withdrawals amongst the members of my friends and family now runs well into double figures. This year was probably the record year as only two of the seven entrants in our gang were able to run thanks to a combination of illness, injury, pregnancy and car crash. Even me and my old man, the only two that actually made it to the startline, had held minor doubts in the days leading up to the event. As well as ongoing management of the ankle, my knee decided to have a wobble on Wednesday morning with an aborted recovery run after 200 yards, and with my wife already out due to some sort of weird viral thing I did briefly consider pulling out as well. Thankfully a couple of successful slow paced runs in the days after gave me confidence things would be OK and so dosed up on ibuprofen for the second race in succession I drove down South to feed on my mum’s lasagne the night before and by Sunday morning we were both ready to roll.

As seems to be customary with Standalone in recent years it was a stunning, if chilly, morning arriving early morning on the farm ahead of the 9:30 KO. It always seems to be this way lately, after my 2008 hurricane experience almost every single one I’ve run has been cool, crisp and sunny. My absolutely ideal conditions for running and so with some decent training in the legs and a few days off the booze behind me I was cautiously optimistic of a decent time. I said last time around I’d be disappointed if I didn’t go sub 40 after a couple of near misses in recent Standalones and when my Mum asked me as usual what I was aiming for so she would know when to expect me on the finishing straight, for the first time since 2013 the usual platitudes of “probably around 40-42 minutes” wouldn’t be good enough. I was going for it.

I lined up between the 35 and 40 minute marker boards, through chance more than design though as it was one of the few patches in the sun as the autumnal chill began to spread into my bones as we waited to get going. I was probably the furthest forward I’d ever stood at Standalone and for the first time ever I could see the timing mats on the ground marking the startline. It would either be a absolute masterstroke or a total folly but I remembered back in 2015 where I got obstructed in the first 100 yards by a group of four spread across the road and then missed the sub 40 by three seconds. This time I was taking no chances. 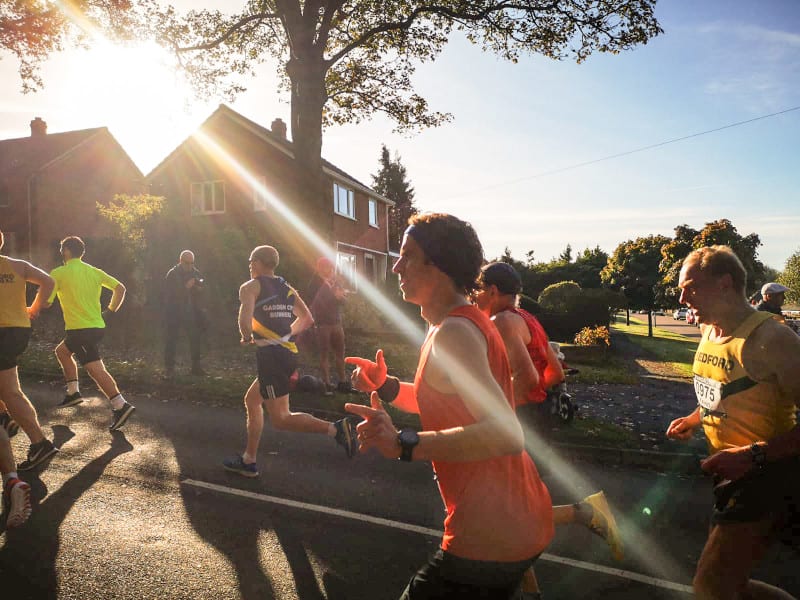 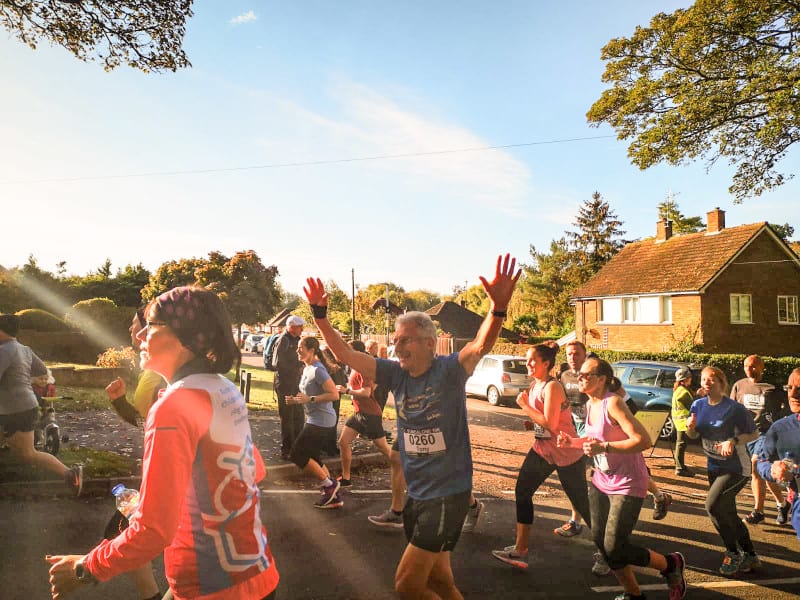 We set off down the ridiculously fast start straight and then almost immediately up that bastard hill they chuck in straight after. It’s always bloody horrible but thankfully short and this year I was nicely distracted by my Mum and my sister stood on the side of the road and screaming about Glastonbury tickets as I ground my way up. Over the crest of the hill and then – bliss. I do love the first half of this race, especially on a morning like this. Gliding serenely along the country lanes of Hertfordshire with clear blue skies overhead and a lovely crisp chill in the air. The leaves on the trees turning yellow just about to drop. Best of all, gradually downhill and I watched the mile splits dropping off one by one: 6:14, 6:08 then a ridiculous 5:58. I only needed to hit 6:26 per mile to get the magic sub 40 but everything was coming together even better than I had intended. I went through halfway only a handful of seconds over my fastest ever 5k and then mile four came in at 6:11. What the bloody hell was happening here?

My Auntie was stood at her usual spot just after we swung off the bypass and we had a brief chat as I went past. You OK? Yea, you? Not bad thanks! How’s it going? I’m pretty warm. See you at Christmas! It was all a bit casual. Should I have been pushing harder? Could I be pushing harder? I felt like I had more left in the tank but we were approaching the bit where the wheels usually come off on the undulating final third of the race. I needed to keep my powder dry and try and avoid the meltdowns of 2015 and 2017 that brought me home seconds over the 40 minute mark.

By this point I’d formed a group of four or five runners and we were all pushing each other along as the going began to get a bit tough. We kept switching positions on the up and down slopes along Stotfold Road but generally we were all running at a similar pace and it helped keep me on track right at the point where I usually go to pieces. I was finishing this Standalone stronger than any I’d run before and then it was time for the big downhill finish. To be honest, it’s all a bit of a blur and I can’t remember exactly where I finished amongst our little cluster but I do recall glancing at the time at the finish line on 38-something and I knowing it would at the very least be my second fastest 10k ever. I saw my mum and sister on the finishing straight as I got the usual big shout out from my uncle on the tannoy and felt a burst of pride knowing I’d achieved something beyond my wildest dreams. When I crossed the line and looked at my time I nearly exploded.

38:18. A new personal best by nearly 25 seconds, smashing the time I set at the 2016 Great Manchester Run when I thought I was at my absolute peak. A time I thought I’d never get close to ever, ever again, let alone beat. I mentioned in my last blog about maybe doing something a bit special but I was honestly talking about this coming Sunday’s Manchester Half Marathon. Standalone was just supposed to have been the warmup and yet I somehow ran the 10k of my life. The fastest I’ve ever (and probably will ever) run over 6.2 miles and my highest ever finish at Standalone, coming home 43rd out of 1,600 entrants. 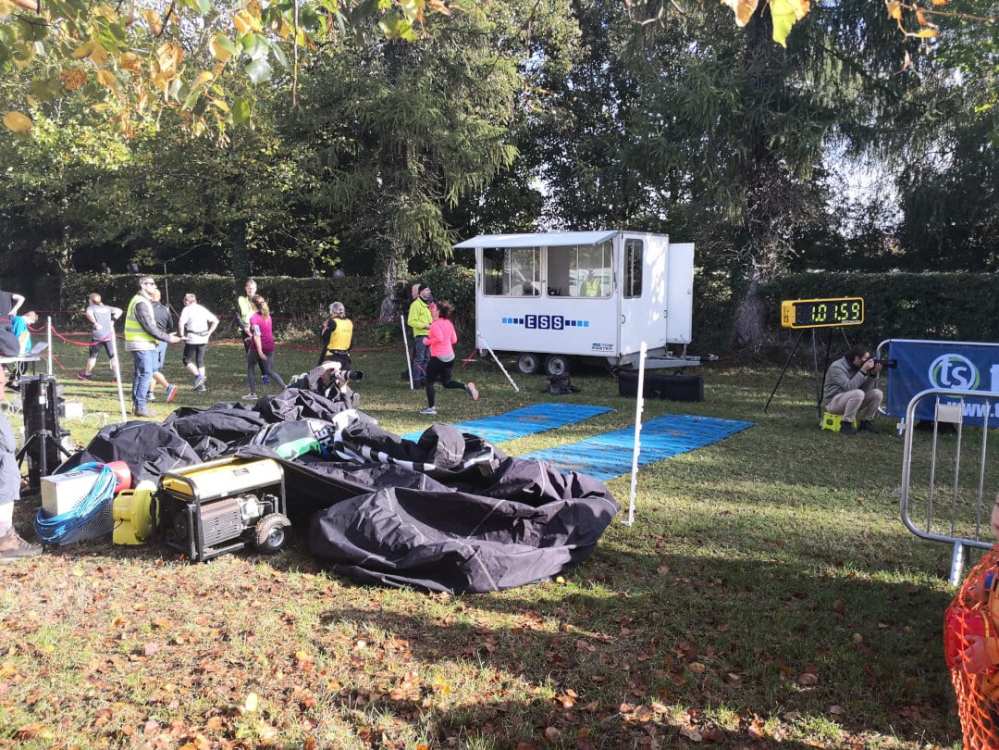 It was a successful day for my old man as well as he thrashed his 1:02 target to bring it home under the magic hour mark, although by the time he’d crossed the line the finishing arch had collapsed in a heap meaning that no-one coming onto the home straight after around 50 minutes had a clue where they were supposed to stop running. It had been a cracking morning for both of us though and despite the fact I’m supposed to be off the booze until after the half marathon I couldn’t help but share a beer with my Dad when we got first back in recognition of a pair jobs well and truly done.

So now looking to this Sunday, here’s the challenge. Can I set two PBs on successive weekends? I’ve often used this pace calculator in the past and although it doesn’t take into account a million and one things that might affect a race time it was incredibly accurate predicting my marathon PB a couple of years back to within a minute, which over 26.2 miles is pretty good going. Putting my brand new shiny shiny 10k time into it seems to suggest I could even go as low as 1:24 on Sunday but I really can’t see that happening. It seems ridiculously implausible and to be honest I wouldn’t really want to start at that sort of pace anyway in case I melt completely further down the road and bugger the whole thing up. But if I can get anywhere near that 2013 PB, or even beat it – even if it’s by a single second to get down it into the 1:27s – then I’ll be a very happy man indeed.

Oh, and it also suggests a 2:56 full marathon might be possible. Now there’s a thought…