The picture above is of two of my favourite men.

I’ve known his Dad, Neil, almost as long. He was never a stranger when he came to see Jonny and always made an effort to chat to us all and find out how we were doing.

Neil wasn’t just my mate’s dad: he was my my mate. On Jonny’s stag do he ran rings around us on the football pitch, bought us pints all night and then shared a taxi home with us when I could barely see or stand up properly, before staying up with us until the small hours watching us eat all of Jonny’s bread in the kitchen, me and my mate drunkenly forcing the dry, chewy morsels in our fat gobs for no other reason other than because we could.

The photo is of Jonny’s wedding day shortly after and you can see in Neil’s face the sheer, unadulterated pride at being able to give his son the send off to his new wife. I love this photo.

Just seven months later Neil was diagnosed with Motor Neurone Disease. Within three months of us finding out this shocking news, he was gone. One of the most outgoing, athletic 55 year olds I’ve ever known had been cut down in his prime by a horrible illness that has no cure.

The Motor Neurone Disease Association exist to do all they can to improve the lives of those people affected by MND, and it didn’t take long after Neil’s diagnosis for Jonny to decide we were all doing something to raise money for them to help them do what they do best: to enable everybody living with MND to receive the best care, achieve the highest possible quality of life and to die with dignity.

We initially settled on the idea of a team Coast to Coast bike ride and this is due to take place in July as the centrepiece of the whole year of fundraising. Regular readers of this blog will know though that this has since grown into a series of challenges attempting to log 1000 miles for Motor Neurone Disease, kicking off with the Manchester marathon in a few weeks time and finishing in September with me and Jonny staggering over the finish line in South Shields at the end of the Great North Run. 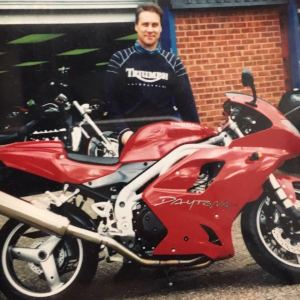 My dad Neil was diagnosed with Motor Neurone Disease (MND) on February the 14 2015 and passed away on May the 14 2015. Prior to this he had been a fit, active, footballing, cycling, triathlon completing 55 year old that I struggled to keep up with on the football pitch.

Needless to say all this happened out the blue and was a massive shock on the whole family.

I would just like to take a bit of time to talk about this last bullet point.

IT HAS NO CURE.

This is a part that I found particularly hard to deal with when the news was shared and still do if I’m honest. I was really cross and upset that he wasn’t given a chance. Most other diseases people have a chance even if it is a tiny one. He deserved a chance. Anyway, that is a pretty selfish thing to say because as cross and upset as I was, and still am about this fact, my dad’s approach was entirely different but not surprising to me in the slightest. I wasn’t surprised because this was his approach to life in general. On the day that he came to tell me the awful news his parting words before he left to give the same news to my sister were “Obviously I will be the one person who defies medical science and beats this thing”. He said it with a smile on his face but I’m pretty sure that on some levels he meant it whole heartedly.

If there is any good to have come from this crappy situation it’s that I feel motivated to try and help sufferers and their families in similar situations. This can only be achieved by raising funding for technology, care, research and raising awareness. So the idea initially was that myself and a few close mates were going to complete the Coast 2 Coast bike ride. This has escalated into a series of events throughout 2016. Some of these events we are all doing. Some are being done by a few of us. Some are being done by one of the group. A couple of them have been entered using Golden Bond places directly from MNDA and therefore come with a minimum amount of money that needs to be raised. I have highlighted the golden bond events and amounts of money that we need to raise for these below.

All of the Golden Bond money goes directly to the charity it is just a way of securing a place before the event ballots open so that we are definitely in.

The events are as follows:

We decided to try and put a theme on the events so we decided to add up all the miles that we will collectively cover during the fundraising in an attempt to travel the distance of Leamington (where my dad lived) to Lake Garda in Italy (where my dad loved to holiday).

This is where we got the name 1000 miles for Motor Neurone Disease.

Our Twitter page is called @C2CforMND as this was the original idea so please follow this as we are still using it to promote the whole effort.

I have set the target for donations at £3000 because that would buy a Lightwriter that would give someone back the ability to communicate with their loved ones. This is an aspect of Motor Neurone Disease that affected my dad very early in his degeneration. He was quickly left with no voice at all and this was something that I know he found really difficult and frustrating. Unfortunately he wasn’t around long enough to get the necessary technology to regain communication. We were simply told that these machines were in high demand and there weren’t many around.

What we did have was a laminated piece of A3 paper with coloured letters around the outside and a clear window in the middle. We used this by holding it up and looking through it at my dad’s eyes while he looked at a sequence of colours and letters and we wrote down what he had spelt out. I’m sure you can imagine that if you had to communicate with your parent or loved ones like this it would not be acceptable. Despite this my dad worked till the day he died. He loved his job and wasn’t going to let a little thing like not being able to speak get in the way of it.

As some of you know I was working for the family business at the time selling the play areas that we manufactured. My uncle also worked for the business and we were in the middle of a big job while my dad was poorly in hospital. We would meet around his bed and spend what seemed like hours reporting back to him and him messaging what to do next using the bloody laminate. I’m sure it was only a few minutes at a time as he tired so quickly but it felt like hours because it was a painstaking process. 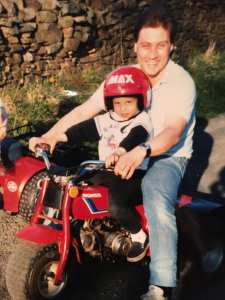 Anyway the day before he passed away he was indicating letters by moving his eyes, I was interpreting and my uncle was writing down. He messaged N then H then S and we kept repeating it back and saying that can’t be right and asking him to do it again. By this point he couldn’t nod his head to tell me it was right and he would just sign it again. Then I realised he was messaging “Does the NHS have play areas”. When me and my uncle said it and my dad confirmed it we just laughed out loud and said for god sake dad.

It would be amazing if we raised that amount of money but hopefully we will smash that total and go even further.

Any donation big or small will be massively appreciated and go to an amazing cause.

Thank you for taking the time to read this waffle. Please don’t judge my bad spelling and poor grammar.