Despite there being good couple of months still left, it’s usually around now when I begin to reflect on how the past year has gone and look forward to the challenges that may await in the future. For the third year running, the Standalone 10k marked the end of my “season”, and I’m chuffed to bits to report that it all went rather well on the country lanes of Hertfordshire. I’ve had a love / hate relationship with the place over the years, as I either seem to run it relatively slow (2008, 2012) or surprisingly fast (last year). It’s a great little race though, and always a proper family affair to boot with my dad, sister, uncle, cousin and my other sister’s boyfriend all taking part in recent history, not to mention several other members of the clan stood at various points around the course cheering us on. This year there would be three of us running, with my uncle on the tannoy again of course.

Unlike last year, I came into this one entirely relaxed about what I wanted to achieve. After four and a half years of trying, Standalone 2013 marked the day I finally got back under 40 minutes for a 10k, followed by an unexpected second success eight months later over on Merseyside. Regular readers will be aware that since then running has fallen off the radar a bit, which is kinda unforgivable for what is supposed to be a running blog, but nevertheless that’s what happened. The training mileage for this one was barely 25 miles from just five runs; hopefully enough to ensure I wasn’t a crippled mess after finishing, but not enough to raise expectations of a fast time. No intervals, no long slow Sundays, no fucking hill repetitions. Just a few evening jogs to loosen up a bit and make sure my legs remembered what they were supposed to be doing and that was that.

Unfortunately, without the pressure of BIG TARGET comes a lack of focus and bad preparation. The journey down South the day before involved six hours spent on one of the hottest coaches I’ve ever been on, meaning it was absolutely inevitable I would end up having a refreshing 6% IPA in one of my favourite pubs in London before catching the train back out of the capital. A quick “splash and dash” pit stop for a couple more beers with some old friends before actually making it home also wasn’t ideal, and although my mum laid on a lovely carby lasagne for us all, thanks to my hop-induced delay I ended up eating it at 10pm, less that 12 hours before the race was due to kick off.

We arrived at the farm nice and early on Sunday morning to pick up our race numbers and so had plenty of time to chew the fat ahead of the 9:30am start. My mum asked us all what what we were all aiming for so she’d know when to look out for us at the finish, and I mumbled something about “probably a good two or three minutes off my best”. My sister and cousin weren’t terrifically confident either, with neither having done a great deal of training and my sister suffering from what would later be diagnosed as vertigo. With all of us having raced here at least once before though, we knew what we were getting ourselves into and generally felt pretty relaxed about running 6.2 miles on this most glorious of autumnal mornings.

As kick off approached, we bid each other farewell as I went to line up with the 40 minute runners through force of habit, although I vowed to take it easy at the start and see what happened from there. It’s a funny old race though, Standalone. After really nasty little uphill section within a few hundred yards of the start, it’s pretty much all downhill until half distance, then a bit up and down (but mostly up) in the second half, before a tremendous last half a mile, hearing my uncle on the tannoy from afar as we all plunge back down onto the farm with all the cheering crowds at the finish. It makes it all a bit hard to pace it properly though as you always start fast and feel brilliant until around half distance, then all too late realise you’ve overcooked it and it’s a right old struggle from there. 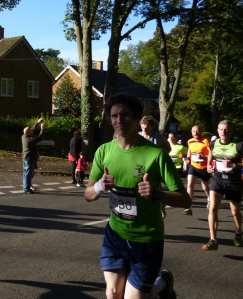 True to form the opening couple of miles were well ahead of what I should have been running with so little preparation in the legs. I couldn’t help myself though as I felt probably the best I’ve ever felt at this stage of a 10k. We couldn’t have had better conditions for racing in; bright, crisp and sunny with a nice little chill in the air preventing us from overheating, unlike last year’s unexpected sweatfest. The little pockets of supporters dotted around the outskirts of Letchworth helped spur us all on, with large families with their kids ringing cowbells or trying to low-five us as we ran past. Groups of lads outside the pubs (at 9:30am!) and various people on bikes. Even the odd Sunday jogger running in the opposite direction shouted encouragement to us all. The field had yet to spread out properly and everyone around me seemed to be running a similar pace, perhaps wary of the magic 6:26 per mile required to hit a sub 40. I found myself sucked into it all against my better judgement, but I felt so damn good it was hard not to.

I was only half paying attention to the time though and it wasn’t until a few kilometres in when I began to take notice of what was actually happening. Going through the halfway stage I was actually faster than at the same stage a year before, clocking myself at 19:27 with a frankly ridiculous 6:05 third mile thrown in along the way. Hang on a cotton picking minute. Was the sub 40 actually on again? I started to play over all the possibilities in my mind. In the Mersey Tunnel 10k in June I was already over the 20 minute mark at half distance and I’d managed to do it from there. Yea okay, so there were a few hills ahead of me, but surely I couldn’t lose half a minute on them? Common sense flew out the window and I kept on pushing. Mile four slipped by another ten seconds under the target and all of a sudden I wasn’t just staring at a sub 40, I was on for an all time PB, beating a record that has stood since May 2009.

In the end, sadly, it wasn’t quite to be, although I ran it pretty damn close. The lack of training predictably kicked in big time, exposing the stupidity of the fast start (and that ridiculous third mile) as I struggled horrendously along the undulations on Stotfold Road. I went into a bit of a daze a couple of times and couldn’t be sure how much time I’d dropped as we headed downhill into the big finish so I

was so absolutely chuffed to see the big clock still on 39-something as I staggered over the last few yards, arms aloft as I got the big shout out over the tannoy from my uncle. A totally unexpected result, I’d clocked it at 39:30: a mere second outside my 2009 PB.

Unfortunately, while glancing at the clock at the finish line, I’d missed seeing my parents in amongst the crowds, but I knew they were there. Twelve months ago I’d stood on that very spot and cheered my dad home in a race he didn’t even know if he’d be able to start, let alone finish; this year he was there doing the same for me, along with my mum, whose lasagne I’d like to think gave me those extra few seconds. I grabbed my finishing t-shirt and walked round and join them in time to see my cousin and sister cross the line as they came in a minute apart just inside the hour mark. Considering my sister couldn’t even move her head without feeling like she was going to be sick everywhere, this was a remarkable achievement. Although she probably shouldn’t have actually run when you think about it, but we can gloss over that now. 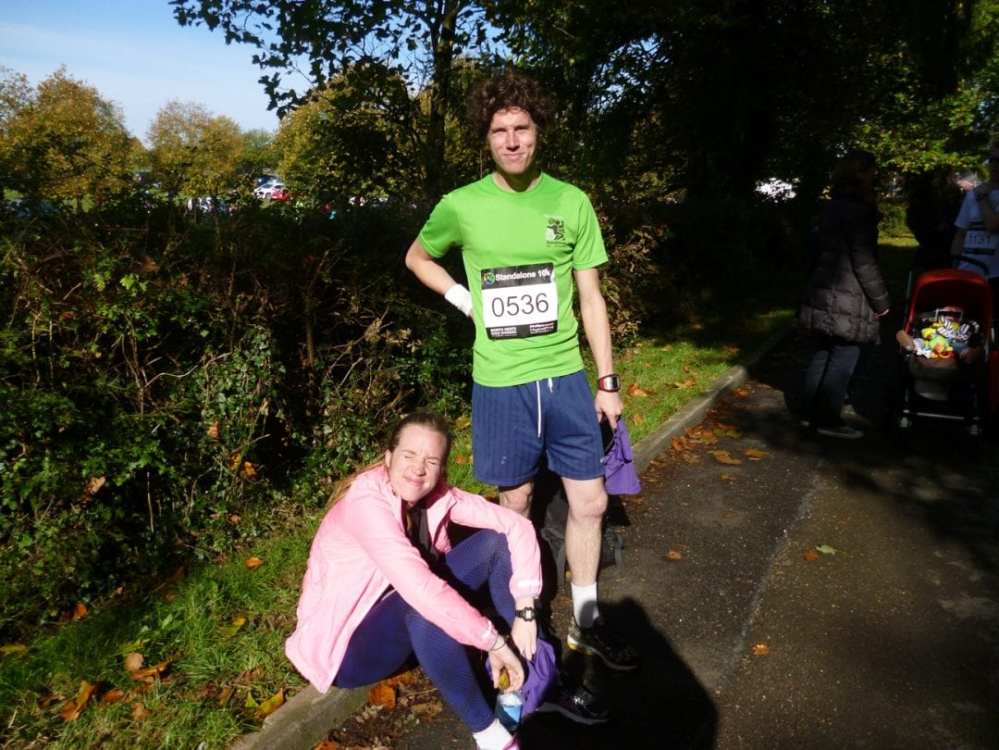 We all met up and congratulated each other on a job well done, and then it was a nervous wait throughout the morning for my official time to come through to see if I’d set a new PB or not. I felt like a bit of a fraud if I’m being completely honest, as I thought about the lack of training and all the drinking and stuff the day before. Hundreds of people taking part would have probably done weeks, maybe months of training, and here I was running as fast as I’ve ever gone without going for a proper run in months. How could I even be sat here contemplating a PB? Last year I put in over 170 miles training for this and had gone slower. I looked back to races like the 2012 We Love Manchester 10k where I’d trained even harder and taken over a minute longer to get round. It didn’t make sense. In the end, my official time of 39:31 confirmed I was a couple of seconds outside my old record, but it was still a bizarrely rewarding feeling getting so close.

So as with this time last year, now all the dust has settled, what’s next on the list? Well first of all, after a sixth successive knockback from London, 2015 ain’t gonna be a marathon year. I might throw in a cheeky spring half though just to blow the Christmas excesses away, perhaps one I’ve done before, maybe something new. Liverpool, Silverstone, Oulton Park, Wilmslow. Who knows? By then, I should’ve found out if I’ve got a place through the ballot in August’s RideLondon-Surrey 100 as I look for some new adventures on two wheels. Or more likely, they’ll probably turn me down for the third year running and take my total number of rejections from London events – including the this year’s Royal Parks Half – into double figures. Either / or.

Whatever happens, I can look back and say that 2014 was a pretty special year, running wise, as I added a trio of new medals and a few more t-shirts to the ever-growing collection. But that only tells half the story. The weeks of slog and sacrifice at the start of the year for April’s marathon almost paid off, and although I missed my target to get into London 2015, I’m still immensely proud of what I achieved as I took 14 minutes off my PB. The pair of sub 40 10ks were completely unexpected, and it would have been three if the course at Southport been measured correctly (and maybe even four if I’d got out of bed for Salford). It’s been a year of two halves, running nearly 750 miles in the first six months and then only 67.5 since. And now, with it all behind me, I begin to plan the next set of challenges so that I can continue to bore you all for another twelve months. Watch this space, I guess.