First up, apologies for the few days’ radio silence. It’s been really difficult trying to get down into words quite how I feel about Sunday morning’s exertions on the streets of Greater Manchester, and a thankfully successful attempt at running 26.2 miles before lunchtime. I’d also like to apologise for the length of this one (that’s what she said etc etc) but trying to condense the full range of emotions into a standard blog-sized post isn’t easy sometimes, and I’ve always lacked a bit of quality control anyway. But I digress. I did it. I ran a marathon. I am now a double marathoner. I am, quite possibly, a bit unhinged.

As predicted in the pre-race blog, the nerves on the morning were pretty bad. The couple of days leading up to it I had been eerily calm, taking it easy, resting and casually ploughing through sandwiches, bagels and as much pasta as I could fit in me. Despite the great unknown as to whether I would be capable of taking 14 minutes off my previous best and hitting my 3:05 target to get a Good For Age time and qualify for London next year, I had felt relaxed. Content with how my training had gone and simply eager to get the thing done. For once, I had slept well the night before but waking up early Sunday morning it must have suddenly hit home what I was about to attempt. The other half said it was the most nervous she had ever seen me before a race, and certainly the hour or so milling around near the start was pretty hellish with multiple visits to the portaloos. Thankfully, unlike the last marathon attempt, there was no unexplained 45 minute delay and so at 9am on the dot we were on our way. It was showtime.

It’s pretty safe to say that first couple of miles were definitely not what I was hoping for though. Despite feeling like I had drunk plenty of water leading up to kick off, I already felt a bit thirsty and seeing a Stella advert after half a mile showing a delicious, cold pint didn’t help the mental state. Knowing that the thirst meant I was probably already a bit dehydrated, I started to panic about what this could mean later on in the race. Had I made some sort of basic schoolboy error and ballsed the whole thing up before I’d even started? My mouth started to feel like cotton wool and although I managed the opening couple of miles at target pace, I was feeling a bit slow, a bit leggy, a bit lethargic. I was worried – the last time this happened at the Silverstone half back in 2012 I ended up having an absolute mare in the latter stages and this would be double the distance again. Surely I’d not ruined months of training with such a stupid mistake?

Happily the first water station arrived after around three miles and that coupled with a claggy energy gel a mile or two later meant I felt like I was getting back on track. I settled into my target pace, hovering nicely around the 7:03 per mile mark I needed and started to almost enjoy myself a bit. This was it after all: the culmination of all that hard work. I was actually out there, doing it. Running a bloody marathon. The miles started to trickle by as I broke the thing down into chunks in my mind to try and rationalise exactly what it was I was attempting. Five miles, OK, that’s nearly a fifth of it done. Six and half, that’s quarter distance. The forecasted biblical rain hadn’t hit us and but for a slight breeze I couldn’t have asked for better weather for running in. The support out on the course was incredible in some spots with all the little kids going mad and shouting the names of every runner as they went past, as well as plenty of (mostly positive) references to my choice of Tottenham shirt for the day. Some of the shouts from the crowd were genuinely amusing, like the chap who noticed me rummaging through my carrier bag of energy gels and yelled out for me to put the packed lunch away. It all helped.

It wasn’t 100% plain sailing though as I was having nagging feelings about the l pace I was running. I had never completely shaken off that initial lethargy and I started to notice a couple of miles going in at a few seconds over my target pace. One or two of these wasn’t a massive deal in the grand scheme of things but I couldn’t afford to make a habit of it. Approaching half distance and coming into Altrincham after posting a 7:16, I had began to suspect it might not happen and then there was the confirmation as I ran under the halfway gantry: 13.1 miles completed, 1:33:00 on the clock. Already half a minute outside what I needed. In theory, not a disaster as a lot of people swear by running a race as a “negative” split, i.e. with the second half faster than the first, but I had never trained for this and I knew I’d find it hard going an hour or so further down the road. I suddenly had a big decision to make: go for glory and deal with the possible consequences, or go sensible and make sure I actually finished. It was a battle between my body and my mind; my head and my heart. I wanted that time that would get me into London so, so much but was it actually realistic?

With a heavy heart, I reluctantly had to listen to my head and stop trying to chase the time. I still had a significant job to do, although now I was over half distance the chunks of the run in my mind were becoming ever smaller. Suddenly it was 17.5 miles and two thirds done. Only an hour of running left. Over the twenty mile mark, three quarters of the run in the bank. Just a 10k to do. I watched helplessly as my pace crept up over 7:20 per mile but I didn’t care about that now. It would still be a new PB so long as I didn’t suddenly hit the wall or fall over again. Through 22 miles; only the second time I ever I had run this far. My mind drifted back to this stage last time in Liverpool and alone in Princes Park, stood against a fence in the drizzle trying to stretch out my battered limbs. Here, I was merrily plodding along through patches of enthusiastic spectators and the water stations with all the amazing volunteers there yelling my name. And then, for the first time ever in my life, I was glad to see Stretford Mall and we all turned back onto Chester Road with just over a mile left to do.

The final section and the finish at Old Trafford will live long in the memory, and not just because it seemed to take about two hours to get up there, with the giant stadium seemingly remaining resolutely on the horizon and refusing to come any closer. It was a real struggle up the most modest of inclines, but a few well placed members of my support crew along that stretch gave me the final boost I needed, and then turning left onto the final section with hundreds of people I’d never met cheering, clapping and roaring my name was pretty bloody special. I saw the clock at the finish line ticking over the 3:07 mark confirming what I already knew about my target, but it didn’t matter to me in the slightest. I had done it. I had finished. I had run a marathon.

For the first time in 187 minutes and 30 seconds, I stopped running. Someone wrapped me up in bacofoil like a leftover turkey on Boxing Day and a medal was placed around my neck. I stumbled around in a bit of a daze and I vaguely remember being given a banana before I sat down against a fence and tried to take in exactly what had just happened. 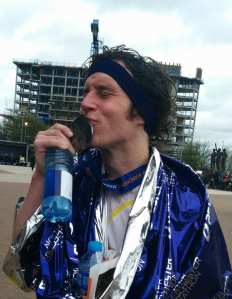 The opening bars of Don’t Stop Believin’ by Journey could be heard in the distance on the tannoy and for some absolutely unknown reason I felt like having a really good cry. I’m not quite sure why. I’d done this before after all. It wasn’t my first marathon. I’d not hit my target, but that was okay with as I had long since accepted that wouldn’t be happening. I can’t explain it, but I just felt incredibly emotional and although I managed to ultimately keep a lid on it, I nearly went again when I reconvened with my fantastic supporters a few minutes later outside the race village and I realised how much it had taken out of me mentally as well as physically. It was time for a beer.

I’ve now had a few days to reflect on how I feel about the whole thing and I am definitely comfortable with the choice I made down in Altrincham. If I had carried on aiming for the 3:05 and then come in a few seconds outside it then yes, I would have been pretty gutted, but sitting here with hindsight I now know that it was 100% the right decision to stop chasing it and I have absolutely no regrets. Discovering later in the race how hard it was to even keep my pace below 7:20 per mile vindicated the decision and if I had blown up at mile 15 or something stupid it would have been a long old morning from there, with the nightmare scenario of failing to finish if I hit the wall completely like some of the poor buggers I saw stumbling around. I simply set my target just that bit too high and there’s no shame in saying that I don’t think. When I first decided to attempt this all the way back in November, I said then it was a massively long shot and so to even come as close as I did to actually doing it (and to take twelve minutes off my PB) is immensely pleasing. A job well done.

So that’s that. Unless they put the Good For Age time back up to 3:10, or I even more miraculously I actually make it through the bloody ballot, I won’t be at London next April. I think I’m cool with that. The thought of starting marathon training again in seven months isn’t especially appealing anyway. It’s a shame that my time would have been good enough to get into London a year or two back but them’s the breaks I guess. I’m still proud of what I achieved on Sunday and some of the texts and Facebook messages from my family and friends in the aftermath were genuinely a bit overwhelming. It really kind of hit home what a big deal it all was. And now, it’s gone and I suddenly have my life back. For the first time since last summer, I have nothing in the diary. I’ve had one of the hardest yet most rewarding starts to a new year in my living memory, out running for hours on end, six days a week, in some of the worst weather we’ve ever had and now it’s all over. I’m “normal” again. And it’s good to be back.