Whisper it, but it definitely appears that I may now have actually entered another marathon. I have paid someone a sum of money. I have an email confirmation from them. I have a reminder in my diary. And, most importantly of all, I have a target. A ridiculous, ludicrous target. Essentially, trying to shave 14 minutes off a personal best, just so that I can get the chance to do it all again in London a year later. Er…hang on a cotton picking minute. Why exactly am I doing this again? Regardless of the lack of sanity involved, the fact is I have a confirmed entry in a 26.2 mile race for the first time since 2011 and I’m gonna have a real good bash at it. Back then, I just wanted to finish. This time, I want to finish faster.

So, with that in mind, it’s natural to try and look for ways I can shave off those precious seconds (OK…minutes) come the big day. One massive thing in my favour is the fact that it is the UK’s flattest marathon. Liverpool certainly isn’t the hilliest, with such “delights” as Snowdonia and the like probably taking up that dubious honour, nevertheless the second half of that race was a real bitch at times making the flat, derelict docklands of the opening half over on Birkenhead almost appear a bizarre industrial paradise after the twin challenges of running a mile uphill at half distance underneath the River Mersey, and then even worse the beast of a climb up Upper Parliament Street, with nearly 10 miles still left to run and having just fallen on my arse in front of everyone in the city centre. I am hoping the relatively pancake like nature of most of Trafford’s byways should give me some sort of edge over that initial effort on Merseyside and enable me to trim some of the time down.

There are other ways of doing this too, of course. I have a more intensive training plan this time around and it’s actually geared towards my target time rather than 15 minutes slower as it was in 2011. I have my beloved Garmin Forerunner to help pace me properly and prevent disaster on the longer runs. With over two years more experience I like to think I am better at judging how fast I should be running, and what I may or may not be capable of. I have a slightly better idea about nutrition and race strategy and all that jazz. All relatively tiny differences, but hopefully important when combined.

The final piece of the jigsaw though, is trying to shed a bit of the old weight. Now let’s get this right, I’ve never really been one to worry too much about how much I weigh, kind of thinking along the lines that I’m not a pro athlete by any stretch of the imagination and I’d rather be content enjoying myself and generally munching what I want, rather than making sure every single meal is 100% balanced and never rewarding myself in any way. Everything in moderation I reckon, apart from the odd aberration when anything goes such as Christmas or summer festival season. Or any visit to Bem Brasil or Red Hot Buffet come to think of it. Nevertheless, I do sometimes find it interesting to carry out a few “experiments” when I know something big is going down just to see just how quickly it can go wrong, and with the parents owning a set of digital scales, Christmas back home with the family is usually a fine time to really go for it. I think the record gain over a festive week was around 8-9lbs, so to only pack on just under half a stone this year was a bit of a result, probably down to running on Christmas Day like a total bloody nutcase and the like.  And to be honest I once put on 7lb eating a single carvery dinner while at university, so I’m never quite sure how much you can read into these things.

So yea, I’m not too fussed about all that really. But one thing I am taking a lot more interest in this time around though is a continuation of my thinking twelve months ago when I was heading towards the Liverpool Half Marathon. As with then, it’s either going to be an absolute masterstroke or one of the most wrongheadedly stupid things I have ever done in my life. And essentially, it all boils down to probably the most important aspect of the whole bloody thing: the rubber beneath my feet.

It all began back in September 2011 as I approached that very first attempt at the 26.2 mile distance, when to be honest I had absolutely no idea what I was doing. After going through pretty much the full life of a pair of ASICS shoes over the course of a 16-week training plan, I needed another pair for race day and for the first time, I decided against going to the shop and having the gait analysis and letting them recommend me a pair. Instead, I just went online and bought the latest version of the pair which had served me so well all the way in 2009; Brooks GTS. A fairly chunky stability shoe, I never thought to check if it was still the right shoe for me. Looking back now with hindsight, some of the reviews weren’t great and the first long run I did in them resulted in pretty serious cramps from around 16 miles onwards. Marathon day was very much the same with a couple of enforced breaks in Sefton Park as I had to stretch my poor, ruined calves out in a (thankfully successful) attempt to get to the finish. The worst thing though was the pain in the days afterwards. Largely focussed around hip and knee joints, I began to think maybe I had got it all very wrong indeed, a feeling backed up a few months later as I began to fall to pieces in the run up to the Silverstone Half Marathon.

From then on, I vowed to look into the alternatives. One of the biggest debates amongst the running community is how much support your feet actually need as a runner, and I still have no idea as to what the correct answer is. Personally, up until last year I’d always been in the stability / support category only by virtue of the fact that I was told by a man in a shop that was what I needed. But as I started to suffer a bit on longer runs I decided, based on absolutely no scientific basis whatsoever, that I was going to start using something with a bit less support, which would hopefully make me a more efficient runner and have the added bonus of less physical weight around my little feets. 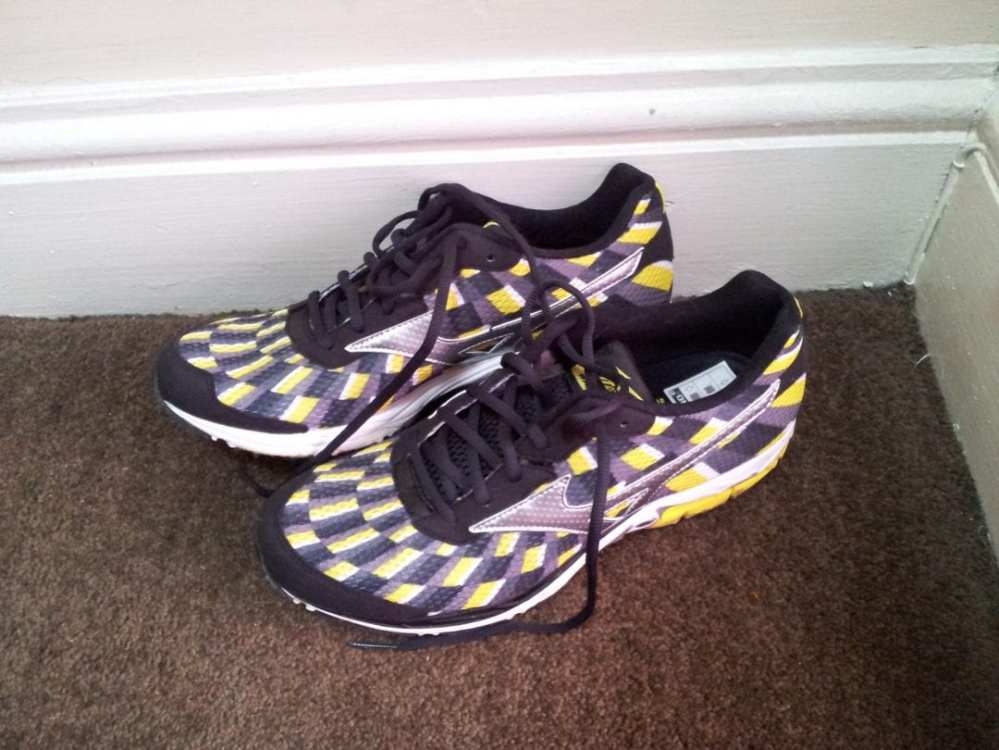 After a lot of really boring research, I eventually settled on the Mizuno Elixir 8 and after the very first run, a gentle three miler just to check for any rubbing or discomfort, felt thoroughly decent I thought, OK, these will do for speedwork and 10ks in future. I began to push them a bit in training, running first six miles, then eight and eventually building up to a ten mile Sunday effort in them, which ended up one of my fastest ever. It was only three weeks before the half marathon and I started to ponder; could I use them for even longer than that and actually make it through a full 13.1 mile race? By swapping them for the stability shoe I would be losing nearly two ounces from each foot, which over several thousand steps could make a world of difference. And so it proved – obliterating my PB by nearly a minute and a half and not picking up a single injury along the way.

So now I’m looking at taking it a whole lot further. Exactly twice as far, in fact. Will the reduced support be enough over double the distance though? I have no idea, but the support shoes fucked me up anyway after two-thirds distance so what is there to lose? Part of me thinks, “lots, you complete idiot”. A marathon places unique demands on the human body and it’s not the sort of thing you can mess about taking risks. I should be looking to make myself as comfortable and supported as possible. And yet science (and my body) seems to be suggesting that it’s mechanically miles more efficient to just run more the way nature intended. Without inches of over-engineered foam attempting to hold my body into the form the shoe manufacturers have intended.

The risk seems worth it to me, in fact the more I think about it the less of a risk it even seems to be. Today was the third weekend in a row with a 15 mile Sunday, and as the second half had to be done at target pace I whacked on the Elixirs for the first time in 2014 and to say it went well is an understatement, accidentally running the last two miles at close to 10k pace and I’m sat here six hours later with barely a niggle in the legs. It’s all completely unexpected and feels utterly ridiculous, but it’s started to fill me with a bit of confidence ahead of this most daunting of challenges. Sadly the Elixirs will be knackered by the time race day comes around, already nearly halfway through their short life despite my best efforts to limit the mileage on them. So I’ve taken a punt on the replacement, the Sayonara. I’m yet to test them, keeping them fresh for closer to the big day with hundreds of miles of training still to do. It feels odd though, sat here twelve weeks before raceday, knowing pretty much exactly what I will be wearing but having absolutely no idea how it’s going to go. The uncertainty is unnerving, but if I’m going to shave those damned minutes off and get into London 2015, I’m going to have to take a few risks along the way. Starting with shedding some weight. I just hope the old legs are up to the challenge.