Apart from this little recap back in 2013, I rarely write about the shoes I actually use to run my runs in, which I guess is maybe kinda odd since I’ve acquired quite a collection over the years, from skinny racing flats to beefcake stability chunky bois and everything in between.

Many have come and gone over the years (with at least ten pairs currently sat in my garage waiting to be taken to be recycled at some point) and although a few notable shoes stand out to me as those I’ve particularly enjoyed running in, or are sentimental to me for races where I’ve achieved something pretty special, I’ve never felt compelled to actually write any sort of review of sorts about any of them. Probably because, mostly, I don’t really know what I’m talking about most of the time. But also because, well, is it really that interesting a subject? (insert joke here about the mind-numbing nature of the rest of my blog).

All that’s changed now anyway after 150 miles in my New Favourite Shoes.

I’ve not worn anything by Reebok since my pair of Hexalite trainers went missing at a bowling alley in Stevenage nearly 30-odd years ago, ending up with me being carried back to the car by my mate’s dad as I didn’t want to walk in my socks on the soggy pavement. Since becoming a running idiot back in 2007, I’ve generally stuck to the same brands – Brooks at first and then mostly Mizuno and Asics in recent years, with the odd New Balance effort thrown in there too (RIP Vazee Prisms, sob). As a running brand, Reebok were never on my radar, at all. No one I knew ran in them. I glossed over the occasional review that popped up without really registering if they were any good or not. Reebok shoes are gym shoes. They don’t do decent running shoes, do they?

A throwaway comment on another running blog somewhere piqued my interest though, something about some Reebok shoe or other being their running shoe of the year. Really, I thought? In amongst all these futuristic new carbon-plated offerings from the likes of Nike, Saucony, New Balance and so on. Reebok? Really? The same Reebok whose shoes I used to get as a kid from Mr. Taylor’s fusty old sports shop back in my home town, in knackered old faded, dusty boxes as they’d been sat up on the shelf for so long? Running shoe of the year? REALLY??

Well it turns out they were right. The Reebok Forever Floatride Energy 2.0 is not just my shoe of the year, it’s one of my favourites of all time. As someone who generally prefers to have a bit of mild stability under their feet, I took a punt on a frankly ridiculous sale on the Reebok website, snaffling a pair for a scarcely-believable £29 and lo and behold I had my first ever pair of neutral shoes. I mean, if they didn’t work for me, that’d be fine – I’ve hardly wasted anything have I? I haven’t nabbed a pair of running shoes as cheap as that since my first ever lot back in 2007, a crappy old pair of Pumas from TK Maxx that I ran in until they literally fell apart.

Aside from the slightly-too-close-to-Chelsea FC-for-my-liking colour scheme, I was impressed with the shoes when they first arrived. The old skool Reebok Vector logo was back after the Delta one that’d appeared on the first edition of these shoes, giving a nice classic look which in some of the other colours especially you’d be more than comfortable with wearing casually. These sadly weren’t in the sale at the time of purchase, hence this Tottenham fan is now running the bulk of his weekly mileage in Chelsea colours, but anyway, I digress. It’s a really classy looking shoe. 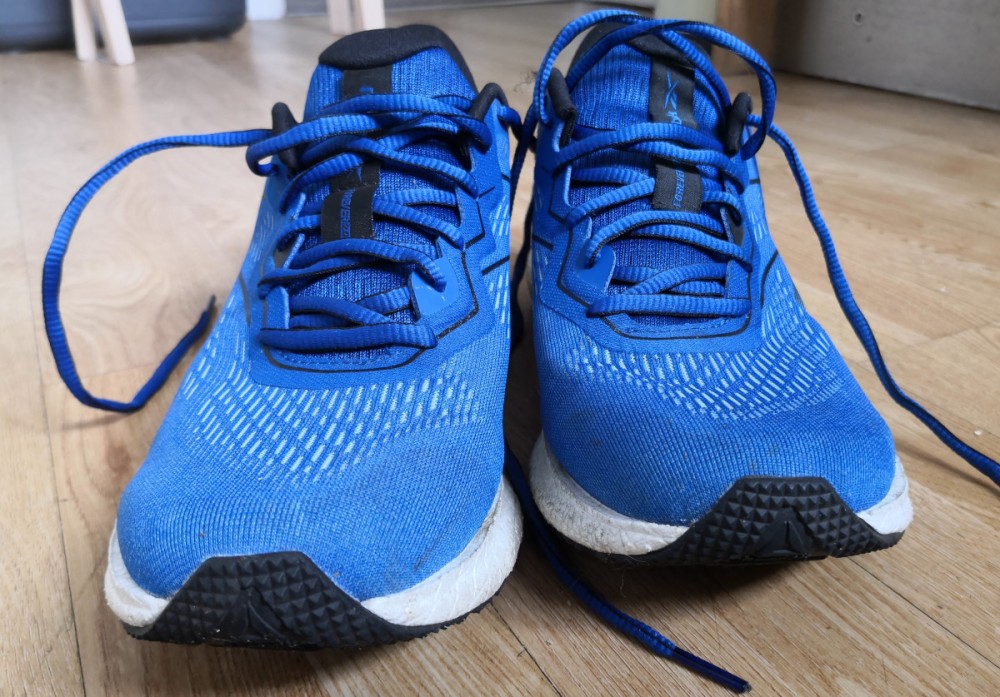 A clean, unfussy upper with which is light and breathable in all the right places (important with all this warm weather we’ve been having lately), the whole shoe feels sleek and well made. Round the back, a nice sturdy heel cup with a bit of padding around the collar offers plenty of support without any slippage, finishing off with a thoroughly useful little pull tab on the back of each heel. 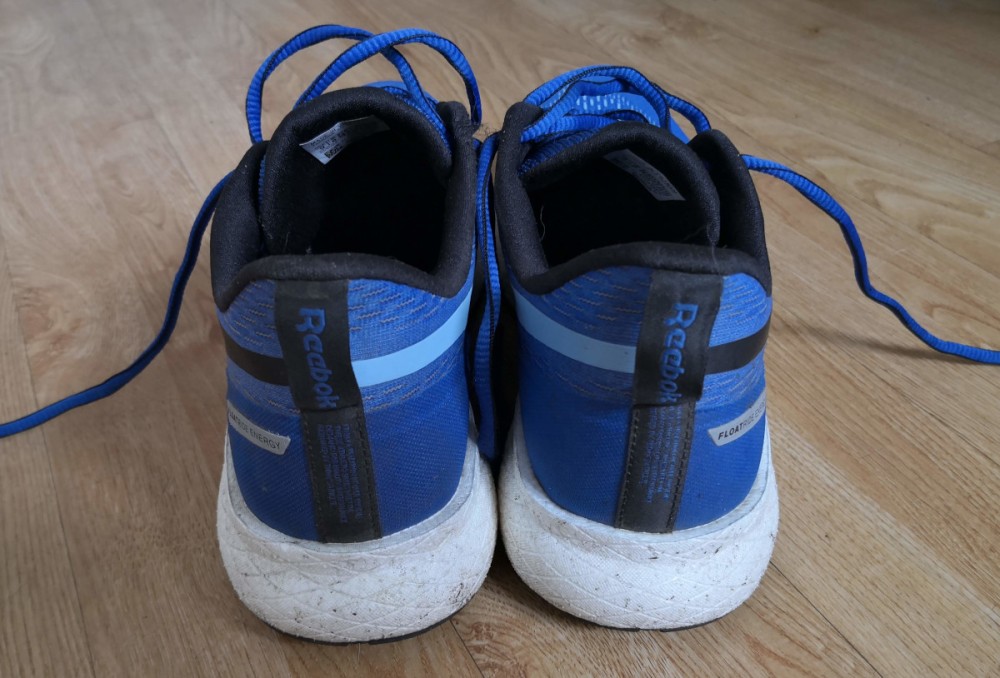 Despite the thick layer of Floatride comprising the midsole (more on that in a bit), they feel light in the hand which was confirmed when I stuck them on the scales, my size 8 coming in at 8.7 oz (just under 250g). The same weight as the Brooks Asteria racing shoes that I used to set all my PBs back in late 2018, and a whole ounce lighter than what I used to consider as my “lightweight” training shoes only three years ago, my beloved Mizuno Catalysts, which is pretty remarkable considering the level of comfort offered here. 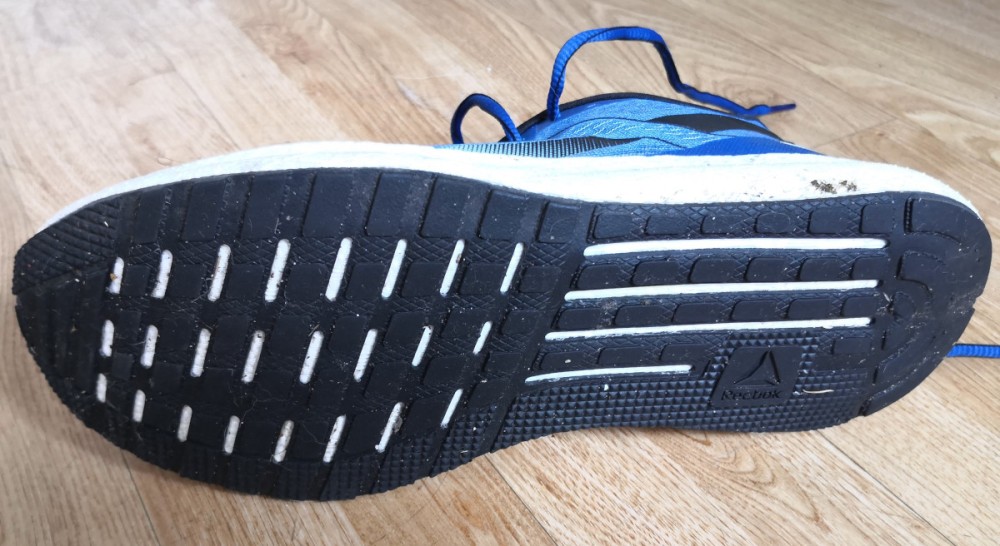 Unlike some of the exposed foam you see on the base of a lot of shoes lately, these have a rubber outsole sitting over the Floatride foam, reminding me a bit of the Continental Tyres compound on my Adidas Adizero Tempo 9s. Those have proved to be amazingly durable over the past twelve months so this bodes well for the long term use should it perform in any way similarly.

Sliding them on for the first time they felt nice and roomy. I’d seen a few people say they had to size down by half a size or so, and the toebox especially felt a bit more open and airy than any of my other shoes but personally I’m totally on board with that, especially as it gives me a bit of wriggle room up top for the longer runs where the feet can swell a bit.

But how do they feel to actually run in? As someone used to running in generally firmer shoes for over a decade, I found that thick, generous layer of Floatride foam in the midsole to be kinda squishy at first, with a nice bit of bounce when jogging on the spot. The very first run was a relaxed seven miles as I wanted to break them in, only to discover they felt absolutely bang on from the get go with no break-in required whatsoever and offering a really nice cushioned feel between myself and the pavement. I decided there and then that these would be my perfect recovery shoes from now on. Something to treat my feet after the harder days when I just want to relax the pace a bit, soaking up that sweet sweet Floatride comfort.

As I hit the home stretch I decided to put in a bit of a push to see if they could hold up to something a bit faster and was rewarded with a surprisingly effortless speedy mile, 10 seconds inside my 10k pace without really feeling like I was trying too hard. Something about the way the Floatride foam works seems to feel more responsive and give a greater snap the more you push the pace, and then the cushioning is still there for the easy days or the longer stuff. This makes it an absolutely fantastic shoe for interval and fartlek sessions in my opinion.

My next few runs I cranked up the distance bit by bit, eventually taking them for a 20-mile Sunday long run, the furthest I’d run for over two years. They were up to the job and then some, my legs feeling fresh pretty much all the way round and I actually ended up running it as a negative split, the first time in my entire life I’d ever done so over that kind of distance.

The icing on the cake was a slow-paced early morning run a couple of weeks ago, just heading out and about to catch the sunrise before work. Coming across a running track marked out on a grass playing field after nine miles I decided to do a quick lap at full tilt and despite those miles already in the legs I took a few seconds off my PB round there, returning home feeling like I still had plenty left in the tank. These are miracle shoes I tells ya.

After 150 miles the wear is pretty minimal. I heel strike a bit so there’s the usual slight scuffing there, but generally they still look, and feel, as good as they did on that very first run. I have faith that I’ll get up to and probably beyond my usual average of 500 miles in these, which I expect will come around fairly soon in all fairness as they’re my daily drivers at the moment.

For everything I tested I’d have to say that they can pretty much do the lot. Maybe for regular track workouts you might want something with a bit of a lower profile (Reebok’s own Floatride Run Fast might be a good option to complement these) but for me personally I’ve yet to have a single run in them where I’ve felt I should’ve picked a different shoe for the job. I genuinely think if you only have one running shoe in your locker it could well be this one. A real Swiss army knife of a shoe and one I genuinely look forward to running in every time I strap them on. I was totally wrong about you Reebok. You are back in the game.